Brazilian associations Abrafrutas and Apex-Brasil have teamed up to promote the country's fruit in eight target markets, including the UAE 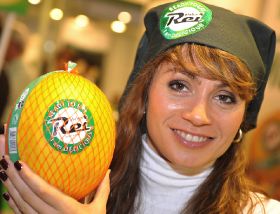 A new export agreement for Brazilian fruit was reached last month by the Brazilian Fruit Producers-Exporters Association (Abrafrutas) and the Brazilian Export and Investment Promotion Agency (Apex-Brasil) with the aim of targeting eight markets: the US, Hong Kong, Russia, Germany, the UK, Spain, France and the UAE.

According to the Brazil-Arab News Agency, ANBA, the deal is set to be valid for two years, with Apex-Brasil and Abrafrutas investing R$4.2m (€1.29m) and R$1m (€310,000) respectively for promotional actions, training for companies and foreign market positioning.

“On average, Brazil exports US$650m worth of fruit per year and the goal is to double that amount in five years," said Abrafrutas chairman Luiz Roberto Barcelos.

Despite Brazil standing as the third leading fruit producer in the world after China and India, the country only exports 2 per cent of production overseas.

Barcelos suggested Brazil's current low export rate was down to the country's family farming culture and huge domestic market. However, he said Brazil's good logistics would stand the country in good stead.

“The project’s target markets have been picked based on demand for Brazilian fruit and logistics," said Barcelos. "There’s no use in going for a market we cannot tap into. The UAE has been selected because it’s a hub, meaning it can distribute to the entire region, because the Middle East has high purchasing power and are habitual fruit buyers. Besides, the logistics are good and we can get shipping transit times lower than 30 days, from 20 to 30 days."

“We know we’re major producers and have great quality," added Eduardo Caldas, the project's manager at Apex-Brasil. "All that’s left is to find the best-suited market to each fruit. Furthermore, through the project we will improve our production chain."

According to Abrafrutas, melons are the most exported fruit from Brazil, with 55 per cent of production being shipped abroad. The top Brazilian export to the UAE is also melon, followed by watermelon, while grapes and mangoes are also starting to be sent to the market.