Government keen to strengthen agricultural ties between the two countries 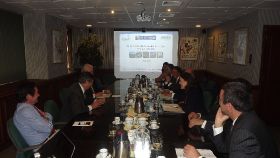 Portugal is looking to attract Chilean fruit producers to invest in the Alqueva Irrigation Project, a scheme to develop 120,000 ha of irrigated land in the Alenteja region in southern Portugal.

During an official visit to the Andean nation this week, Portuguese agriculture minister Assunção Cristas met with Asoex president Ronald Bown to explore new ways of boosting agricultural ties between the two countries, such as increasing imports and exports, reciprocal investments in production and the use of the Portuguese port of Sines as a gateway for arrivals of Chilean fruit.

Praising the work done by Asoex to promote Chilean fruit exports, Cristas said the possibility existed for Portugal to increase imports in order to complement local production. “Our trade is well balanced as Chile ranks 30th as a destination for Portuguese agrifood exports and is also ranked 30th as a supplier,” she noted.

Cristas pointed out that two Portuguese companies had already carried out significant investments in Chile – one in the production of tomatoes and fruit concentrates and other in the wine industry.

“The idea is to see whether there is an opportunity for Chilean fruit companies to now invest in Portugal,” she said, adding that a number of financial incentives existed to attract agricultural investment.

In particular, Cristas highlighted the possibility to be a part of the Alqueva Irrigation Project in an area boasting fertile soils and climate favouring fruit production.