Not for the first time, the mainstream media has got carried away by the idea of Cavendish bananas disappearing overnight 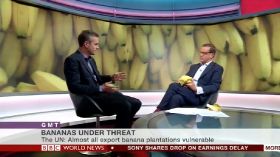 Last week, several journalists in the mainstream press revisited the story of Panama disease – the fungal infection also known as TR4 or Fusarium wilt that destroys banana plant roots – and the existential threat it poses to global production of Cavendish bananas. Inevitably, perhaps, given the mass media's hunger for stories with immediacy and instant impact that can support 24-hour news coverage, there are plenty of journalists out there who are happy to return every so often to the idea of a so-called #bananapocalypse (see also #avocalypse), the potential rapid destruction of the western world's commercial banana business resulting in the fruit's disappearance from supermarket shelves. Ever since Mike Peed raised awareness of what one Malaysian newspaper called "the HIV of banana plantations" in his excellent 2011 piece for The New Yorker, news of the impending implosion of our banana supply has been 'about to happen'. In late 2013, Nature reported that TR4 had been found in Mozambique and Jordan, raising fears it could spread to major producers and decimate supplies; the following March, it was a "lumbering goliath" on the move towards Latin America; last December, Michael Ford told The Grow Network that the bananapocalypse was indeed coming; and then just last month, experts attending the International Banana Congress in Miami were reported by The Guardian as racing to stop that same disaster.