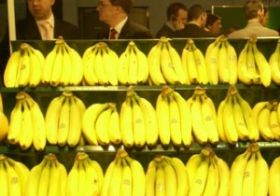 The European Commission has fined two of Europe's leading banana import companies, Dole and Weichert, with fines totalling €60.3m (US$82.4m) for price fixing in violation of the European Union's anti-trust laws between 1 January 2000 and December 2002.

"The European Commission has found that banana importers Chiquita, Dole and Weichert participated in a cartel between 2000 and 2002," an EU executive said today in a statement. "Chiquita was not fined as it provided information to the Commission that enabled it to open its investigation."

Dole, which has been fined €45.6m (US$62.3m), said it believed that it had not violated European competition laws and confirmed plans to appeal the decision and the fine imposed.

For its part in the cartel, Weichert has been handed a €14.7m (US$20.1m) penalty. US -based Fresh Del Monte Produce, which owned Weichert during the period covered by the decision, has also been held "jointly and severally liable" according to the ruling, and is therefore jointly accountable for the Weichert fine. "At the time of the infringement, Weichert was trading mainly Del Monte branded bananas," said the statement.

Ireland-based company Fyffes, which now operates Weichert as a joint venture, said in a statement that it would not be liable for any violation of anti-trust laws at Weichert. "Fyffes plc understands it has not been found to have breached EU Competition Rules and no fine has been imposed on it," the group commented.

In a statement, Del Monte confirmed that it "indirectly held a non-controlling financial interest" in Weichert until December 2002. But, having not yet received details of the decision, Del Monte's spokesperson said the company was therefore unable to comment on the Commission's basis for asserting liability against it as a result of Weichert's conduct.

"The Company believes, however, that any assertion of liability based on an allegation that the company controlled Weichert would be without merit," the statement continued. "Once the company has received the full decision, it will consider its options, including an action for annulment in the European Court of First Instance."

The fines imposed represent far less than the 10 per cent of the companies' annual net revenues which the EC is permitted to demand under its official fining guidelines. Dole, the world's largest producer and marketer of high-quality fresh fruit and vegetables and the leading producer or organic bananas, posted net revenues of €5.07bn (US$6.93bn) last year.

Chiquita's fine, reduced by 100 per cent under the so-called leniency notice, would reportedly have been €83.2m (US$113.1m). The Commission revealed that the fines on Dole and Weichert had been reduced by 60 per cent "in view of the particular circumstances of the case, including the specific regulatory regime for the banana market that was in place at the time".

An additional reduction of 10 per cent was accorded to Weichert as it did not participate in a part of the cartel, the report added.

According to the Commission's ruling, the cartel affected Austria, Belgium, Denmark, Finland, Germany, Luxembourg, The Netherlands and Sweden, where the combined retail value of the 1.6m tonnes of bananas sold in 2002 amounted to around €2.5bn (US$3.4bn).

EC Competition Commissioner Neelie Kroes said: "European consumers spend significant sums on bananas every year. It is totally unacceptable for companies to have rigged prices in this manner and the companies concerned must learn the hard way that the Commission will not tolerate such behaviour."

The statement continued: "The banana business is organised in weekly cycles. During the relevant period, the importers of leading brands of bananas into the eight EU member states principally served by North European ports set and then announced every Thursday morning their reference price ("quotation price") for the following week.

"On numerous occasions over the three-year period, there were bilateral phone calls among the companies, usually the day before they set their price. During these calls the companies discussed or disclosed their pricing intentions: how they saw the price evolving or whether they intended to maintain, increase or decrease the quotation price."