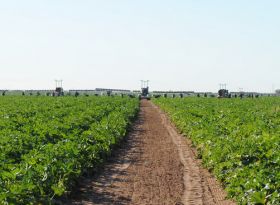 SunFed is beefing up its summer vegetable programme, adding aubergines to its existing line-up of tomatoes, squash, peppers and cucumber for the first time.

After its inaugural season, the company plans to take its aubergine programme year-round, part of a wider strategy to eliminate seasonality from all its offerings in the long term through expanded growing programmes, increased value-added offerings and new, sustainably sourced products.

“We envision a year-round programme in everything that we’re doing,” said Craig Slate, vice president of sales, “with a smaller offering from 1 November through 1 June when Nogales will make up the larger portion of our operation.”

Texas serves as an important distribution hub from which the company can leverage its proximity to coastal markets to its advantage—particularly in the off season when decreased travel time can be a significant boon—providing optimally fresh product to consumers across the country.

“During the summer months, Texas is the natural destination point due to proximity of growing regions; whereas, because it’s a year-round opportunity, during the winter months, that is when we’re going to utilise our Texas operations to give us access to the entire East Coast,” noted Matt Mandel, vice president of operations.

“It’s a freshness advantage in that the supply chain going to the East Coast will shave a day—sometimes two—off of transit times compared to Nogales.”