Once a luxury food, bananas are on their way to becoming the country’s best selling fruit 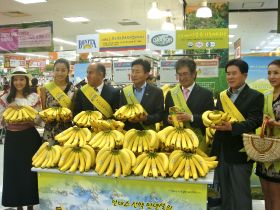 Banana sales at retail giant E-mart grew 8.7 per cent to US$32.48m in the first half of 2017 compared to the year-earlier period, according to a report in The Korea Herald. Apple sales fell 16.2 per cent during the same period, largely as a result of soaring prices.

The retailer predicts that full-year banana sales will reach a record high.

Bananas used to be a luxury food in South Korea in the 1980s when they were relatively expensive compared to other fruits. But prices have fallen as imports from the Philippines and Latin America have increased and today they are one of the most affordable fruits in the country.

Customs data shows that imports are becoming increasingly diversified. In the first half of 2016, 88 per cent of imported bananas came from the Philippines, while this year the figure had dropped to 75 per cent. At the same time imports from Ecuador increased from 10 per cent to 15 per cent.

“Bananas are cheap and popular among young women as an alternative to a meal,” said E-Mart buyer Lee Jin-pyo. “We expect bananas to be the best-selling fruit for this year for the first time.”