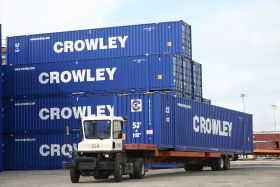 King Ocean Services and Crowley Caribbean Services, both long-time customers at Broward County's Port Everglades, have entered into a vessel sharing agreement (VSA) that will expand their reach into the port's top trade market, Central America.

In addition, King Ocean will sail its own ship from Port Everglades to Costa Rica for the first time as the VSA calls for alternating ships weekly with Crowley on this route.

“This new agreement saves our customers time, at least by one full day, because we now have direct service to Port Everglades from Costa Rica and Panama instead of stopping in Miami first,” said King Ocean’s Franco Da Costa Gomez.

It also means the parties can charter space to each other on an as needed/as available basis for the northbound movement of empty containers.

Central America accounts for 37 per cent of all international trade through Port Everglades. Refrigerated cargo such as pineapples and melons are among the top import commodities.

At the crossroads of north-south and east-west trade, Broward County's Port Everglades is Florida's leading container port, handling more than 1m TEUs and serving as a gateway to Latin America, the Caribbean, Europe and Asia.

Located within the cities of Fort Lauderdale, Hollywood, and Dania Beach, Florida, Port Everglades is in the heart of one of the world's largest consumer regions, including a constant flow of approximately 110m visitors state-wide and 6m residents within an 80-mile radius.