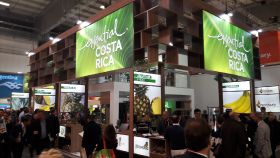 Costa Rica will showcase its ample fresh produce offer for the first time at next week’s Asia Fruit Logistica trade fair in Hong Kong, reflecting the growing importance of the Asian market for the country’s exporters.

According to trade promotion agency Procomer, pineapples, bananas, exotic fruit, roots and tubers will be among the products on display at the country’s stand.

“This is the first year we are participating in this fair with a 40m2 stand and we hope to increase our presence at future editions,” said Procomer’s Tiffany Girón.

Between 2015 and 2016 Costa Rican fresh produce exports to Asia increased by 29 per cent and they are expected to show further strong growth this year following the opening of the Chinese market to Costa Rican pineapples earlier this year.

“Pineapple shipments to China are forecast to rise by an average of 31 per cent a year to 2021 in terms of weight,” Girón said.

The logistics involved in reaching such a distant market is one of the major challenges that shippers will have to overcome.

Gilles Marit of The Fruit Farm Group said maintaining quality standards is of crucial importance if Costa Rica is to carve out a successful niche in China.

“We’ll be competing with fruit from various origins that has a very short transit time to the Chinese market. Our fruit will need to be in perfect condition on arrival and this is a great challenge given that the transit time is slightly less than 30 days,” he told Fruitnet.

Costa Rica is the world’s biggest exporter of fresh pineapples and one of the leading banana exporters. Together these two products account for the large majority of the country’s US$2.7bn annual agricultural exports.

Asia is one of the key targets in Procomer’s market diversification strategy and shipments to countries like China, Japan and South Korea are growing rapidly.