The rise and rise of sweet potatoes 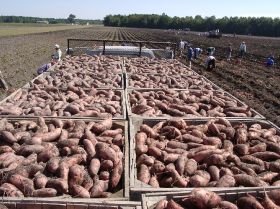 Sweet potatoes from the US continue to make a lasting impression in the European market and among European consumers, according to the North Carolina Sweet Potato Commission (NCSCP), which represents one of the most prolific growing areas for the vegetable in the world. With a market share of more than 63 per cent in 2016, the US is by far the largest supplier of sweet potatoes to the European market. This number is growing steadily, namely by more than 20 per cent in recent years, as trends towards a health-conscious diet bring about greater demand for variety in terms of recipes and tastes. It is this gap that US sweet potatoes benefit from and bridge perfectly.

In 2016, 126,520 tonnes of US sweet potatoes were exported to Europe, denoting a gain of more than 48 per cent on the previous year. Sales data from the three major importing countries – Germany, the UK and the Netherlands – reflect the soaring popularity of the category. From 2015 to 2016, the volume of sweet potatoes imported directly has gone up from 870 tonnes to 1,100 tonnes in Germany; from 38,820 tonnes to 49,530 tonnes in the Netherlands and from 80,900 tonnes to 114,200 tonnes in the UK. A sizeable proportion of US sweet potatoes are imported by the latter two due to their intermediary roles in the European market, and while they import the tubers directly, they also ship substantial quantities to other European countries. In 2016, these promising shipment-related exports to the Netherlands scored a total import value of €41m.

A notable achievement has been the opening of the Scandinavian market, with more and more retailers in Sweden, Denmark and Finland now stocking US sweet potatoes. According to the NCSCP, US exports to Scandinavian countries reached a record high of more than 6,000 tonnes last year, which generated an import value of almost €5.5m. This could be the precursor to even higher sales as new markets embrace sweet potatoes.

There are many other success stories to tell around Europe. While exports to the UK and the Netherlands include transshipments, sales in Germany mirror national purchases alone. Considering these numbers, it does not come as a surprise that overall consumption of the vegetable in Germany has increased by 1,000 per cent over the past ten years. This progress is even more notable as a staggering 99 per cent of all US sweet potatoes exported to Germany hit the market as raw ingredients. Convenience products and frozen as well as fresh sweet potato fries are particularly popular at the moment. At the beginning of 2016, Edeka was the first German retailer to expand its segment by frozen sweet potato fries under its private label. In the field of convenience foods, frozen food producer Frosta launched several sweet potato products at once, such as vegetarian burger patties, extending the product range in German retail further.

Against the backdrop of these developments, demands for creative concepts on how to cook and what to do with sweet potatoes are also on the rise, NCSCP reports. This is seen as both a challenge and an opportunity, leaving plenty of room for innovative economic endeavours in a number of fields.

Marketing efforts such as those by the German agency mk² gmbh set an example in terms of how demand for US sweet potatoes can be met. Making use of the aforementioned dynamics in retail, mk² gmbh devised a comprehensive strategic campaign, which proved to be highly effective and valuable. For the second year in a row, a promotional ‘Street Food Truck Tour’ has been initiated with a branded food truck stopping at a number of German retailers and large-scale outdoor events to promote sweet potato dishes from August through to October, targeting up to 125,000 consumers. Consumers are able to taste sweet potatoes both in their popular form of fries and in creative dishes such as savoury-sweet potato waffles and skewers. ncspc points out that, by balancing the innovative and the popular, the activity successfully addresses a broad range of target groups and draws the attention to US sweet potatoes effectively. It also offers opportunities to answer questions on the origin and nutritional value of sweet potatoes as well as their versatility. Moreover, it allows for information materials and recipes to be distributed and raise product awareness.

German consumers have been highly responsive to sweet potatoes entering and conquering the market, which becomes apparent when looking at how the campaign boosted sales, highlighting the immediate success of the cooperation between the street food truck and retailers. The positive perception of sweet potato dishes and printed materials as well as the notable growth in sales suggest positive prospects for further growth in Germany. Strategies of this kind might be transferred to other EU countries in order to achieve similar results.