Predicting the future of wholesale markets

The markets of tomorrow will be more efficient and socially responsible, WUWM Congress is told 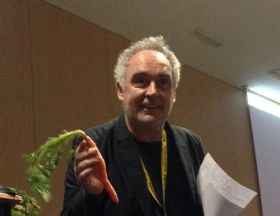 Representatives from the world’s leading wholesale markets gathered in Barcelona this week for the biennial World Union of Wholesale Markets Congress.

Sustainability and social responsibility were the central theme at the conference, which attracted around 250 delegates from 25 countries, and the choice of Mercabarna as the organiser of this edition recognises the market’s leadership in areas such as environmental management, the fight against food waste and the promotion of healthy eating habits.

Among the highlights of the varied programme were the presentation of the findings of a detailed study by Kantar Worldpannel on the strategies markets should employ to adapt to changes in consumer habits in Europe, Asia and the US; the launch of Bullipedia, a new initiative by renowned chef Ferran Adria of elBullifoundation to further understanding and creativity through the classification of fresh ingredients; analysis on the use of digital technology to optimise the day-to-day management of markets, and the presentation of successful strategies being employed by markets throughout the world to become more sustainable, generate employment, reduce waste and promote social cohesion.

One of the most enlightening sessions was a presentation by Joan Rivera of Kantar Worldpannel of the findings of an extensive study commissioned by Mercabarna on the changing face of global consumers, which surveyed 177,000 households over a three-year period and identified eight key trends likely to shape consumer habits to 2030.

An expanding and ageing global population, where income levels are increasing and more and more people are living alone, will have important implications for fresh produce suppliers.

Older households, for example, consume more fruits and vegetables and prefer to shop at local and convenience stores, making more frequent visits than supermarket shoppers. Suppliers should therefore focus on creating value by providing smaller pack sizes for this segment of the population.

Meanwhile, with time-strapped consumers spending more on food outside the home than ever before, demand from restaurants and ready meal manufacturers for fresh produce is likely to strengthen in the coming years. Inside the home too, consumers have less time for cooking and therefore will require time-saving ingredient options.

Time constraints will also mean that more consumers shop online in the future. E-commerce was the only channel that saw an increase in sales between 2014 and 2016, during which period supermarkets and hypermarkets saw sales decline, and traditional, discount and convenience shops remained flat. Kantar Worldpannel predicts that by 2025, e-commerce is expected to account for 10 per cent of all grocery sales.

The growing use of technology also means that tomorrow’s consumers will be better informed about the products they buy, and it will be more important than ever for suppliers to communicate the value of their offer in a truthful and informative way.

The focus on healthy eating – and in particular the move away from animal proteins to plant-based alternatives – is good news for fruit and vegetable supplies, while the trend towards local sourcing, meanwhile, could become a unique selling point for traders and markets.