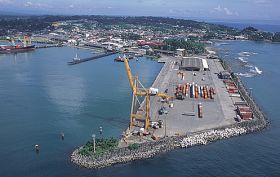 The government and public sector workers in Costa Rica have agreed to enter into talks to bring to an end an indefinite strike that is now in its second week.

The unions, which are protesting against government tax reform plans, released a statement indicating their willingness to negotiate with the mediation of the Catholic church but without suspending the strike, that began on 10 September.

Although most state services have continued to function normally, the strike has interrupted classes in schools and colleges, and affected services in public hospitals.

Workers have also blockaded roads in different parts of the country, where they have made it difficult to distribute fuel and hit traffic to tourist areas.

On Monday, riot police used tear gas to disperse a crowd of protesters who blocked the entrance to the terminal at the Caribbean port of Moin in Limón, through which most of Costa Rica's exports pass.

“In view of the impact on exports and imports that sustain the economy, we have decided to intervene at the entrance of the port,” security minister Michael Soto said.

Last Thursday, the Chamber of Exporters of Costa Rica (Cadexco) said the walkout was causing insecurity for the transit of goods, roadblocks in different points and disrupting operations at the port in Moin.

However, the port authorities refuted the claims, insisting that the port had maintained operations throughout the walkout.

Greivin Villegas, president of the Board of Port Administration and Economic Development of the Atlantic Coast (Japdeva), said that the strike had not affected Japdeva’s activities at the port, “thanks to the inter-institutional coordination with Public Security and shipping companies and the strategic plan prepared to deal with the strike”.
He said that the loading and unloading of ships had not been affected.

Nevertheless, Cadexco maintained that the situation was “generating uncertainty among our international clients, affecting our credibility before buyers and impacting the image of the country”.