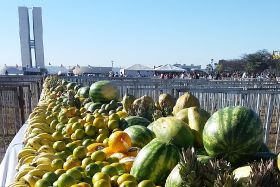 South African sources have said that the arrival of the first imported Brazilian mangoes in the country will boost the category and lengthen the season.

Unlike avocados, where South African growers are lengthening their season to become self-sufficient in the local market, South African mango growers have a much shorter season.

“This is hampering the efforts to increase the awareness of mangoes and their great value amongst consumers,” says Subtrop’s Derek Donkin.

The first Brazilian mangoes arrived in late September and shipments are expected to continue till the end of November.

“The Brazilian growers are making use of a window in the market and as long as it is not extending into the South African season it will benefit local growers,” says Donkin.

Donkin says while South African growers are positive about expanding their production, the early season provides some opportunities for imported mangoes.

The Brazilian Fruit Association Abrafrutas said that it had recently been granted access to South Africa after years of negotiations.

The fruit originates from São Francisco Valley which is the main exporter of the fruit, accounting for more than 90 per cent of total shipments.

Brazil exported US$73m of fresh and dried mangoes between January and August this year.

Donkin said that unlike the rapid growth in avocados in the South African market, mangoes are a relatively obscure fruit which are eaten on occasion, rather on a daily basis. “It will be great if we can increase awareness amongst consumers," he said.

South Africa is also a big importer of out of season stonefruit and table grapes, as well as various kinds of berries. Stonefruit and grape imports are mostly confined to the period between July and September before the new South African season starts.