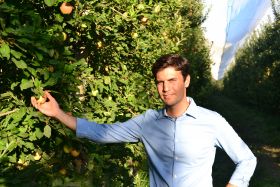 Patagonian Fruits Trade is Argentina’s biggest exporter of organic apple and pears and one of the leading topfruit exporters in the Alto Valle region of Río Negro province. Vice president Nicolás Sánchez, son of founder and owner Hugo Sánchez, tells Fruitnet why the company’s decision to stake its future on sustainable production has helped buffer it from the crisis sweeping through the valley’s topfruit industry and why the recent takeover of renowned topfruit producer Moño Azul will play a key role in its future development.

Patagonian Fruits Trade was one of the first Argentine companies invest heavily in organic production. Why did you decide to follow this path?

Nicolás Sánchez: It was partly in recognition to the growing market trend, and partly a philosophical question. When my father first moved into organics in the early 1990s, there was a growing trend towards ecological production, although the term organic wasn’t widely used.

But it was the philosophy behind the movement that made us persevere in a niche where the returns were very volatile. Today, organics represent the core of PFT’s business and this year they will account for 60 per cent of our overall volume. We would like this to increase to 100 per cent, but the demand isn’t yet there – this is still a niche sector.

Does the company share an equally strong sense of purpose when it comes to questions of social and environmental responsibility?

NS: Here the philosophical question also comes into play and in addition to our specific CSR programmes, as organic producers we make a significant contribution to our ecosystem and the health of our clients. Organic production is, by its very definition, based on the care and nurturing of the soil, unlike other crops which have more in common with mining as they are simply extracted from the ground.

Right now we’re working hard to reduce our energy consumption and hope to soon reach the point where renewables account for 80 per cent of our energy usage.

What do you consider to be the most urgent sustainability challenge facing the sector today?

NS: The shortage of workers, at least in Argentina, is a pressing issue that is likely to impact the sector in the short term.

What is the outlook for the 2019 apples and pear production season? Are you expecting increase in volume compared to last year?

NS: Overall we’ve seen a good harvest in terms of volume. The cold spring has led to a greater availability of smaller sizes in pears, and localised hailstorms have affected production in some parts of the valley. Right now we’re keeping our fingers crossed because it has been very wet year with a lot of rain.

The macroeconomic situation that they country finds itself in will make this a challenging season financially, and the situation will be compounded by the losses sustained by the sector last year. On top of that, the Northern Hemisphere has had a record harvest and stocks are very high.

Does this mean that the increase in Argentine exports last year was down to external factors such as the shorter Northern Hemisphere crop production and the devaluation of the dollar rather than improvements in the sector itself?

NS: Undoubtedly, the main reason for last season’s recovery was the lack of fruit in northern Europe and a slight improvement in Argentina’s competitiveness compared to 2017. But there has been no recovery within the industry itself. There are a number of deep-rooted structural issues that need to be addressed, but the sector’s lack of profitability (which is true of all regional economies in Argentina) and the absence of credit makes it difficult to effect positive change.

It is difficult for producers to capitalise on the devalued dollar because once to you take into account inflation, new taxes and lower state refunds, the financial situation they face is the same, if not worse than last year. A lot will depend on what happens with the exchange rate and inflation in the first four months of 2019.

Among the more positive aspects of the last campaign, we saw a sharp rise in shipments of Argentine apples to India. How do you see the potential of this, and other new markets, in the medium and long term?

NS: India is undoubtedly a market with huge potential for Argentine apples and pears. We’re not sending large volumes at the moment, but I believe that the relationship with this market will develop quickly. Competitiveness will be critical, because Chile and South Africa, among others, are entering with a lot of volume at very competitive prices.

China is another interesting opportunity, although the phytosanitary protocol we currently have is virtually unworkable. Despite hundreds of hectares of production being registered to export to China, very few containers will be shipped this season.

Producers in the valley are seeking to diversify their export markets, and being able to ship significant volumes to the BRIC countries would be a boon for the region’s economy.

North Africa is another market of interest – this used to be a very important market for the valley in the past.

In September, the Prima Group, of which the Sánchez family are the principal stakeholders, acquired one of the region’s oldest and best-know topfruit companies Moño Azul. What plans do you have to incorporate this iconic brand into the group?

NS: PFT was created purely as an export company to overseas markets. Moño Azul will play a key role in the development of the Latin American market, which PFT hasn’t previously had the infrastructure to supply. In addition, there are a number of synergies we can make in overseas markets – the Moño Azul brand has a lot of traction.

Moño Azul is one of the biggest scalps claimed by the crisis affecting Argentina’s topfruit sector. How do you see the prospects for the industry in the medium and long term and what can be done to overcome the current difficulties?

NS: Undoubtedly the crisis we are going through has given us the opportunity to acquire Moño Azul, which will be a major part of our business in the coming years. Since the 1950s, the only years in which Argentina has seen a fiscal surplus, the reactivation of its industry and economy, higher employment and a reduction in poverty have been those in which it has had a higher or more competitive real exchange rate.

The intense downturn we have experienced over the past 12 years has led us to become the Latin American country with the lowest exports in relation to gross national product. I don’t think it’s sustainable for a soda to cost less in New York than it does in Buenos Aires. I believe we have learned from this experience and what’s important now is to get through this current crisis. I’m confident that in the not-too-distant future the sector will return to profitability and we’ll have the necessary financing to reactivate the industry.

Given the financial constraints you face, what is the company doing to improve its production, packaging, postharvest and customer service processes?

NS: We undertake continuous investments in technology to improve efficiency in our packhouse. It’s possible because the technology is readily available. There is also a great need to modernise farms, but here we face a shortage of available technology. We are closely following new developments – our R&D team are in contact with specialists in Israel, the US, the Netherlands and Italy regarding innovations in mechanical harvesting. That would be a disruptor for the sector.