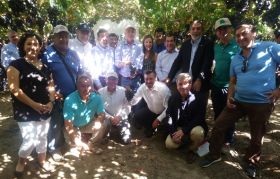 A group of growers in Chile’s Aconcagua Valley has become the first company in the country to grow and market Maylen table grapes under the Fairtrade label.

MiFruta brings together a number of small producers from Los Andes and San Felipe who have been growing the variety for several years under a programme supported by the Production Development Corporation (Corfo) and Fedefruta.

The company already ships non-Fairtraded Maylen grapes to China, South Korea and the US and says new markets like Japan now beckon.

“As small producers, it was important for us to aim for Fairtrade certification,” said Leonardo Valenzuela, who describes the label as “a rubber stamp that helps to differentiate us from our competitors”.

Maylen, which derives its name from the Mapuche word meaning princess or noble woman, was created by the Institute of Agricultural Research (INIA) with the support of biotech consortium Biofrutales, and is the first table grape to be developed exclusively in Chile.

It is a medium to late season black grape, harvested around three to four weeks before Autumn Royal, and according to INIA stands out for its easy management, colour, flavour and excellent post-harvest shelf-life, making it ideal for distant markets like Asia.

According to MiFruta, Maylen achieves similar prices to other black varieties like Autumn Royal in markets like Asia and the US.

There are currently 375ha of Maylen production in Chile. Around 400,000 cartons were exported last season and this figure is set to reach 1m cartons in 2018/19.

On Tuesday, Biofrutales organised a study visit to MiFruta to highlight advances in producing and marketing the variety and to showcase the company as an example of a successful development model that other producers should follow.

The event was attended by Agriculture Minister Antonio Walker, Fedefruta president Jorge Valenzuela, INIA director Pedro Bustos and representatives of Corfo and ANA, which manages the variety in Chile.

“This is the first and most successful commercial variety developed in Chile, but if we continue to strengthen this alliance, many more varieties will follow,” Walker said.

Corfo’s vice president, Sebastián Sichel, highlighted the essential role that organisations like Fedefruta and Corfo played in the success of the project.

“This would not be possible without the guilds, the universities and the small producers…and the systematic support of Fedefruta for its members,” he said.

Valenzuela noted that Maylen marked the beginning of a new fruit boom in Chile. “In table grapes we’ve gone from having five varieties a few years ago to 37 available today in Chile,” he said.