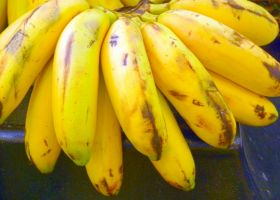 Plantain producers in Mexico’s Soconusco region say the silting of shipping channels of the Port of Chiapas, their main exit point, could make the port inaccessible and put exports in jeopardy.

The Association of Plantain Producers of Soconusco (APPS) warns that unless the problem is addressed urgently, around 250,000 tonnes of plantains shipped through the port every year to the US, Europe and Asia could be under threat.

APPS president Eduardo Altúzar López told Cuarto Poder de Chiapas that producers had begun negotiations with the federal government to authorise the Mexican Navy to dredge the channels with the help of specialist companies.

Cruise ship traffic, as well as exports of other agricultural products like rambutan, mango, soya and sugar, are also said to be in jeopardy.

APPS accuses the port of not maintaining the navigation channels properly. A high volume of sand and silt was carried into the channels by marine currents in the aftermath of the earthquake struck the region in September 2017.

“We ask the federal government to support us with the dredging, it is a necessity, because we are on the verge of not being able to export,” Altúzar said. “We do not want the money to be given to us, what we need is for them to carry out the de-silting.”

At a press conference this week, Altúzar said that 350 containers of plantain are sent to the US every week from Chiapas, along with six to Europe and five to Japan. He pointed out that local producers had made significant investments in coldstorage and warehousing facilities at the port.

“At present we can only enter and leave at high tide. We can’t let this go on, because if Chiquita – the company that buys our production – the reefer carriers and cruise ships stop entering the port, it would bankrupt the regional economy,” Altúzar said.

Soconusco has around 15,000ha of plantain plantations. Local producers are also calling for the expansion of the port terminal to increase their competitiveness and efficiency in loading and unloading.

According to 2016 figures from Sagarpa, Mexico harvested 2.1m tonnes of plantains in 2015. The states with the biggest productions were Chiapas (31 per cent), Tabasco (26 per cent), and Veracruz (14 per cent).

The US was the largest buyer of Mexican plantains in that year, accounting for more than 75 per cent of exports, followed by Spain, and the Netherlands.