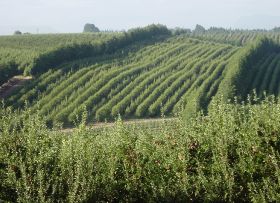 The greenhouse gas emissions generated by the South African topfruit industry have fallen since the start of the decade, a new report shows.

The Life Cycle Assessment (LCA), which determines the level of emissions per kilogram apples and pears produced in 2000, 2010 and 2020, shows that these declined between 2000 and 2010 and are predicted to fall further once the final results for the 2010-2020 period are in.

Lorren De Kock, of the World Wildlife Fund said the study covered the greenhouse gas emissions generated at the farm, packhouse, CA storage and coldstore stages with all relevant inputs.

“The inputs for all stages covered electricity use, diesel, fertilisers, pesticides and packaging, amongst others things, aligned to other international LCA studies on fruit,” De Kock noted.

“It was found that there is a significant decline in greenhouse gas emissions per kilogram fruit from the year 2000 to 2010 with a predicted further decline from 2010 to 2020.”

Announcing the results, exporter Tru-Cape Marketing said: “Although there is a heightened awareness and pressure from consumers and supermarkets, particularly in Europe, at the moment, to limit plastics and other carbon-emission heavy items, Tru-Cape Fruit Marketing, and many in the South African apple and pear industry, have for some years now been actively working to reduce the environmental cost of fruit production”.

The company noted that its owners, Ceres Fruit Growers and Two-a-Day had also made significant progress in reducing water usage by overhauling irrigation systems and adjusting planting practices at farm level.

“Reducing plastic use has also been on the agenda for some time, so, a recent study by the World Wildlife Fund that recognises the strides already made, is good news.”

De Kock said the findings of the LCA study was important due to the relatively high embedded carbon content of South African products and the shift in export markets such as the European Union to more environmentally sustainable purchasing which could lead to soft trade barriers on products with high embedded carbon.

“This research finds that the embedded carbon content of South African apples and pears, which, in the past, had relatively high carbon emissions per kilogram compared to other producing countries, is declining rapidly which is advantageous to the international trade of this fruit,” she noted.

Amanda Fisher of Tru-Cape Fruit Marketing is spearheading the company’s focus on reducing plastics even further.

“We are working closely with our global customers who, like us, want to further limit the use of ‘hard to recycle plastic’ in fruit packaging,” she said.

“We have various trials underway to try to move to a Polyethylene films instead of Polypropylene film which is hard to recycle. We have also re-looked at where we can cut back unnecessary use of plastics, such as the protective bubble sheets used in the flow-wrapping packs for our UK clients.”

Fisher added that the company had significantly cut down on the amount of plastic bubble sheets it uses, while still maintaining protection for the fruit to prevent bruising.

According to Fisher, Tru-Cape is very aware of the ever-increasing demand for plastic reduction and the responsible use of plastic for all purposes and for the use of more environmentally friendly alternatives, all of which are burning issues.

“In light of this Tru-Cape formed a workgroup this year to strategise ways how to reduce plastic within our chain while still maintaining the quality of the fruit,” she explained.

“We need to keep in mind, with the increasing pressures of plastic reduction that we still need to maintain the best environment and quality of our fruit for the end customer.

“We are considering all these aspects as we put together our plan and goals and are cautiously optimistic about our findings.”