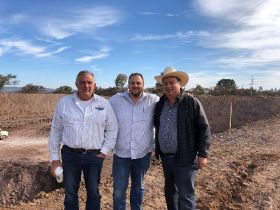 Berry People is anticipating a sizeable increase in its imported and domestic conventional and organic blueberry programmes this year.

As the Mexican and California seasons wind down and the company prepares to transition to its Pacific Northwest supply, president Jerald Downs said overall volumes had seen a six-fold increase in the year to date, while North American supply had tripled since last year.

The Hollister, California-based company will be offering branded blueberries from Washington State starting in late June and from British Columbia in Canada starting around 10 July.

Its North American blueberry volumes will grow significantly this year and will be available through the arrival of its imported fruit towards mid-September.

“Our overall blueberry supply has grown by over six-fold year-to-date, largely based on the groundwork laid in 2017/18,” Downs said.

“Berry People has a substantial untapped blueberry supply base from shareholders and alliance partners, but we are being careful to expand based on our customer programmes.”

Berry People’s North American blueberry volumes specifically look to be up around three-fold over last year.

“This means we have plenty of room to grow domestically as we manage our year-round distribution footprint and counter-seasonal supply balance,” Downs added.

The company’s new late-season Oregon and Peruvian blueberry deals as well, meanwhile, will provide continuity of supply for the critical window from mid-September until the end of October.

“The majority of this new production will be organic, with peak volumes in October,” said Downs. “Additionally, we expect significant growth from our existing northern Chilean supplier base, after a successful season last year. This fruit is also primarily organic.”

In addition, Berry People will begin harvest on its shareholders’ new organic blueberry planting in Jalisco, Mexico, which has been developed especially for the fall harvest window.

“As we reach critical mass in the blueberry category, we are dedicating more resources to its management to improve our overall genetic position, pack-style and packaging offering, market prediction and pricing, as well as programme placement,” Downs said.

He noted that Berry People is experiencing steady and strong development on multiple fronts, as it becomes a major supplier of organic berries to the US market.

“Some developments include the refining of processes, systems and personnel in anticipation of future growth, the recent closing on a substantial cash flow line of credit, and an eminent office move to accommodate the personnel increase towards the fourth quarter,” Downs said.

He added that these developments are initiated and sustained on the basis of mutual trust in the relationships with its customer and grower partners.

“Being trustworthy does not always mean being popular,” he stated. “By this I mean walking the fine line of managing grower and customer expectations while also holding ourselves to the highest standard of performance possible, with hopes to continually exceed expectations over time.

“Approaching our relationships in this way, including with our shareholders’ farms, has enabled us to grow our footprint substantially from 2018 to 2019, while preserving the company vision, and moving forward ‘at the speed of trust’, keeping operations and sales results under control.

“It is important to take solid steps forward and to be satisfied with quality work and quality relationships upon which to build.”