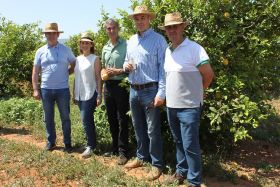 Coca-Cola has announced that Spain will become its preferred supplier of organic lemon juice for the production of its Honest brand of organic teas, which it plans to launch imminently in Europe.

The founder of Honest, Seth Goldman, travelled to the region of Murcia last week to visit two of the orchards that will supply the raw material for his products, Hacienda del Pino – owned by Spain’s largest producer of organic lemons, Mundosol Quality – and Finca Carmina.

José Antonio García, director of the Interprofessional Association of Lemon and Grapefruit (Ailimpo), said Coca-Cola’s choice was a significant achievement for Spain in light of the stiff competition from other countries.

"There is no doubt that this partnership between Ailimpo and the Coca-Cola Company validates the good work, commitment, responsibility, passion and vision of organic lemon producers in Spain. It is undoubtedly a recognition that gives prestige to Spain, its organic lemons and derived products,” he said.

Coca-Cola said its visit to Murcia had been “a great learning trip as we are often not fully aware that most of the ingredients in soft drinks start in the field and would not exist without the care and dedication of the farmers".

Goldman noted that one of the things that had most caught his attention "was the level of determination to eliminate the use of pesticides, find alternatives to conventional fertilisers, promote biodiversity and use the latest drip irrigation technology to obtain ecological lemons with a fantastic taste, in one of the driest and most water-scarce areas of Europe”.

The organic lemon juice that Spain will supply to Honest will be used to make its range of teas with lemon and organic lemonades that will be marketed in Europe, according to the director of Ailimpo.