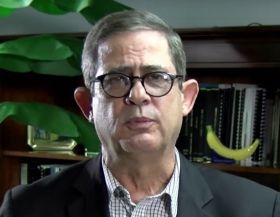 The two-day conference, which takes place at Miami’s Hyatt Regency Hotel on 21 and 22 November, will bring together global experts to determine agreed course of action to contain and combat the disease, and provide banana producers throughout Latin America with the latest advances and measures to prevent its spread.

In June of this year, the Colombian government reported the arrival of the fungus to four farms in La Guajira, located in the northeast of that country, putting the entire continent on high alert.
“Fusarium TR4, is one of the worst diseases affecting bananas, as it is able to survive for up to 30 years in the soil,” said Corbana’s manager, Jorge Sauma.

“The disease can be spread in many by different ways: it can be transported on the shoes or clothes of a person who has entered a contaminated farm and for that reason it is vital that the entire banana industry take biosecurity measures, to avoid its propagation,” added Dr Jorge Sandoval, director of Corbana’s Research Centre.

TR4 is currently present in Southeast Asia (Indonesia, Malaysia, Philippines, China, North Australia and India); Middle East (Pakistan, Jordan, Israel and Lebanon); Africa (Mozambique) and, most recently, in South America (Colombia).
It is estimated that more than 100,000ha of plantations are already affected by the disease.

For more information on the conference contact Angie Ortega of the Inter-American Communication Agency on +506 8860-0305.