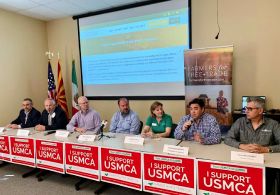 The Fresh Produce Association of the Americas (FPAA) has welcomed the announcement that an agreement has been reached to move ahead with formal adoption of the US-Mexico-Canada Agreement (USMCA).

The FPAA said it is optimistic that the efforts of House Speaker Nancy Pelosi and Ways and Means Committee chairman Richard Neal along with the US Trade Representative Robert Lighthizer and negotiators from Mexico and Canada will result in passage of an agreement that will continue to strengthen US businesses and trade in North America.

It noted that its member companies rely on stable, reliable trade relationships in North America to provide jobs for US employees and to provide high quality fresh produce to consumers throughout the year.

The FPAA has been working with a broad coalition of companies and industry groups to actively meet with Members of Congress urging them to formerly pass the USMCA implementing language.

“We urge all House and Senate members to vote “yes” for the USMCA. Bipartisan support is crucial in ensuring that there is stability for US companies involved in trade,” said FPAA president Lance Jungmeyer.

“This is crucial for the economic growth of all of North America. We appreciate the hard work from Speaker Pelosi, Chairman Neal, and Ambassador Lighthizer in addressing the concerns that now clear the way for passage of this important trade agreement.”

The USMCA is the result of many months of negotiations between Canada, Mexico, and the US to modernise the foundational rules of the North American Free Trade Agreement first established 25 years ago.

“We are excited to see what the next 25 years will bring within the new framework of the USMCA. So many improvements were adopted to better leverage North American cooperation and collaboration, and that type of close working relationship is what has made the US, Canada, and Mexico the strongest trading block in the world,” said Jungmeyer.

“The USMCA is the right agreement to bring us into the 21st century and beyond.  I look forward to broad, bipartisan support to pass the agreement.”