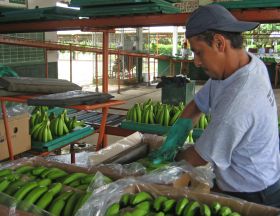 Concern within Ecuador’s banana sector is reportedly increasing following the news that the country’s banana export sales fell by 13.5 per cent or 20.7m boxes during September compared with the previous month.

The Association of Ecuadorian Banana Exporters (AEBE) told El Comercio that it had suspended shipments of bananas to Europe and Russia for this week (ends 1 November) due to the reduction in demand.

According to AEBE managing director Eduardo Ledesma, the decrease in exports is a direct result of the global financial crisis, which is causing consumer fruit sales to fall in the US, Europe and Russia.

Mr Ledesma said consumers in Ecuador’s key markets were saving money and only buying essential products. For this reason, he argued, Ecuadorian exporters needed to reduce banana box prices and maintain these prices at fixed rates to ensure that they did not lose clients.

An estimated 75 per cent of Ecuador’s banana exports are shipped to the US, Europe and Russia.