Brandt’s Fruit Trees is licensed to become the US propagation manager for the Inored cv., marketed as the Story apple 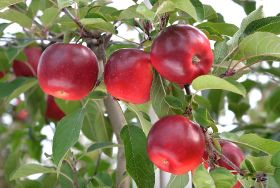 Washington state-based Brandt’s Fruit Trees is making a change to its offering having highlighted the fact that, in recent years, shifts in consumer preferences have led to "significant declines" in the demand for commodity-type fruits.

According to the apple and stonefruit grower, the downward spiral of returns for "old-school" varieties has reached a point where, in many cases, they do not begin to cover the cost to grow them – and this has ultimately lead lead them to a new cultivar, known at the Story apple.

"Remaining static is not an option for a grower to remain viable, but the decision to make changes and what to plant does not come without a great deal of consideration and study," the group noted.

In an effort to help their growers make the decision of what to plant, Brandt’s Fruit Trees said that it had spent years networking and building relationships with some of the most prolific breeding programmes not only in the US but also around the world, as they continually seek out new and interesting cultivars for their growers to choose from.

For more than 30 years, Brandt’s Fruit Trees has served as the US representative for products released by the breeding programmes at INRAE, CEP INNOVATION and NOVADI.

According to Brandt's, the French institute INRAE is the world’s top institute for research on agriculture, food and the environment.

INRAE is engaged in joint breeding partnerships with NOVADI and CEP InnoVation, two companies owned by several of the leading tree-fruit nursery companies in France.

Brandt’s Fruit Trees was recently licensed to become the US propagation manager for one of INRAE’s newest selections, the Inored cv., marketed as the Story apple.

“We are budding Inored cv. onto rootstock in 2020 in preparation for the first tree plantings in the United States to take place in 2022," explained Kevin Brandt, vice-president of Brandt’s Fruit Trees. "We are happy to answer questions about Story, Inored cv. or take pre-orders now.”

The group said that the next focus would be exciting new releases in the stonefruit category, which will be made available to growers in the US in the very near future.