New DC will add more than 200,000 ft2 of flexible, food-grade storage at fastest growing container port in US 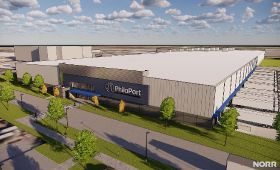 The PhilaPort Distribution Centre will fuel the next phase of development for one of the fastest growing ports in America.

“In the plan to grow the Port of Philadelphia as rapidly as possible, this new warehouse is a critical component,” said Governor Tom Wolf.

“As a result of our infrastructure improvements, the same large ships that have been calling neighbouring ports can now call the Port of Philadelphia. As we continue to recover from the Covid-19 pandemic, now is the time to accelerate our throughput and growth.”

PhilaPort is the fastest growing container port in the US, and this facility is expected to continue to propel growth.

Last year, the Port moved a record 640,000 TEU and achieved 7 per cent growth during a difficult global economic environment. Compound annual growth over the past 10 years has been 10 per cent.

The US$42m, 201,621 ft2building is a critical step in the development of the port’s Packer Avenue Marine Terminal, the region’s main container terminal.

The new food-grade warehouse is one mile from the marine terminal and will help the Port attract new shippers and ocean lines.

“We will leverage this building to bring new ocean carrier services to Philadelphia, and to bring major new beneficial cargo owners (BCOs) to our Port,” said PhilaPort executive director and CEO Jeff Theobald.

“Our proximity to the Lehigh Valley and other major distribution centre hubs cannot be overstated. But for some shippers, the need for near-dock warehousing like the PhilaPort Distribution Centre is critical.”

Holt Logistics Corp. will be the operator of the new building, which will serve as a major adjunct to the container operations at Packer Avenue Marine Terminal.

This new warehouse will allow Holt to get containers off the terminal and rapidly unloaded into a state-of-the-art facility.

Containers can then be returned directly to the marine terminal or moved to a Pennsylvania factory to be loaded with exports, further expanding opportunities for local and regional commerce.

“We often use the phrase ‘a rising tide lifts all boats’, but in this case our rising land-based infrastructure will lift the entire Philadelphia region to new heights,” said Leo Holt, president of Holt Logistics.

“As a marine terminal operator, one of the main pillars of our service profile is velocity. Today’s shippers demand it. It is essential to our aspirations to grow the Port of Philadelphia’s throughput by 100 per cent.”

A planned second phase for the development of this site includes a 217,000 ft2 refrigerated building, which will make it a truly multi-purpose facility.