The group plans to acquire 3,700ha of land this year to develop its Hass production 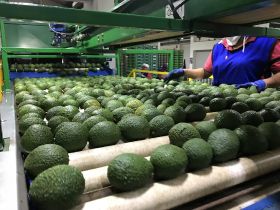 Israeli agro-industrial conglomerate Managro has launched an ambitious plan to develop its Hass avocado production base in Colombia.

The group plans to buy 3,700ha of land this year, requiring an investment of US$60m, according to CEO Chagai Stern.

Managro’s goal is to guarantee year-round production of high-quality avocado using genetic improvement to allow Colombia to compete with other Latin American suppliers, even as they extended their seasons, Stern told Portafolio.

The announcement comes national unrest in Colombia enters its seventh week, which have impacted logistics and caused severe disruption to exports of coffee, avocados and other perishable products.

Protestors accuse centre-right President Iván Duque’s pro-business policies of leading to inequality and a lack of opportunities in education and employment.

Commenting on the strike, Stern said: “Foreign investors invest all over the world and they have a global view. This happened in Chile and in Washington and even in Israel. These types of demonstrations are only short-term.

“Obviously, international banks are attentive to the situation in the country, but in the long term the demonstrations are not seen as a problem for foreign investors to continue helping to develop the country.”