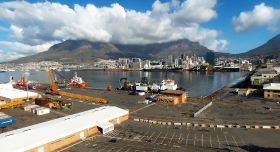 There may be some relief for hard-pressed South African logistics service suppliers and fresh produce exporters who, for some years now, have had to deal with inefficiencies in the country’s ports.

Nowhere has there been more problems and frustrations than in the port of Cape Town.

Two key announcements by president Cyril Ramaphosa during a visit to Cape Town, however, have suggested that the National Port Authority, previously operating under Transnet, will soon become an independent subsidiary.

At the same time, it was announced that R100bn would be invested in improving infrastructure across the country’s ports.

The full details will be announced sometime into the future - but the fresh produce export industry will be happy that, at last, things seem to be happening to address the dismal performances of the recent past.

During the past few years leading industry players have attended countless meetings with the authorities to try and improve port performances.

It is significant that Ramaphosa made his statement in Cape Town, which was recently named in a World Bank Report as one of the worst ports in Africa.

Leading commentators are now playing a waiting game following the announcements, and have said the proof of the pudding will be in the eating.

They have pointed out that fundamental restructuring of ownership and investment to lift South African ports will be key to resolving matters.

The roadshow provided an opportunity for port users to review and provide inputs into port plans, capital expenditure plans and port performance, which are then taken into consideration by the Ports Regulator of South Africa when setting tariffs.

A spokesperson said that the central theme of the submission was the fact port of Cape Town users were currently being charged excessive costs that are 146 per cent higher than the global sample average.

It is acknowledged that the past year has been a particularly difficult period for the port of Cape Town, compounded by the Covid-19 pandemic.

“However much of this could have been avoided had there been ongoing investment and maintenance of infrastructure over previous years.”

The Western Cape government said it welcomed the commitment by Transnet Port Terminals (TPT) to seek global operators to invest in port operations, and requested that the initiative is incorporated into the official planning as a bold step that will ensure "competitive and world-class ports in South Africa".

Some members of the export fraternity in Cape Town said that most of the annually recurring problems in Cape Town had been dragging on for a long time. They also indicated that privatisation of the port would be the best solution.

Establishing the Port Authority as an independent body – which would essentially operate under the present structure – would therefore be a step in the right direction.

However, they said that remaining under the umbrella of Transnet was not what was required to bring a permanent solution to problems and establish a real public-private partnership.