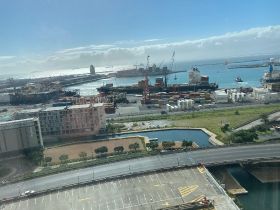 The South African fruit industry is facing another major challenge this week as violence in two provinces caused disruptions to citrus exports.

The trouble has been compounded by a cyber-attack on Transnet, the South African road and port authority, which has forced the introduction of manual systems for loading and offloading at all ports.

Fruit industry leaders said the disruption would not be severe provided the Transnet systems return to normal by the end of the week. “If we run into next week, we could be facing severe problems,” said Hannes de Waal of the Sunday River Citrus Company.

Confirming the cyber-attack, Transnet said it was prioritising the export of reefer containers, primarily through the Port of Durban.

“Two export-bound vessels have started a loading cycle at Pier 2, while a third vessel is discharging imports at Pier 1 and will soon commence with the loading of reefer containers,” the company said.

According to Transnet, since April reefer container volumes have been 12 per cent higher than in the same period last year.

The disruption to Transnet’s systems is now also affecting other sectors of the industry still shipping fruit from the 2021 crop, such as apples, pears, avocados, as well as initial volumes of blueberries.

“It's simply a fact that we cannot move containers onto vessels quickly enough to relieve the pressure on the stacks in the ports,” commented one shipping source.

“The manual system is too slow to effectively clear containers from the port and get them out to the industry. In some cases, container vessels had to wait outside port for more than a week and this is something we cannot afford.”

Cornel van der Merwe, chairman of the Citrus Growers Association, said the disruption has come at a bad time for the citrus industry, which had just started to recover from the problems in the port of Durban.

“Through great cooperation we managed to minimise much of the disruption, but we did not bargain with a second curveball,” he told Fruitnet. “At present things are still moving along, but the next three days till the end of the week will it be crucial for us.”

Although the South African apple and pear shipping programmes are far advanced, July and August are still crucial months for delivery into Europe and the UK.

The blueberry export season, meanwhile, is just about to start and with the limited air freight available exporters have no choice but to increase sea shipments. Delicate products such as berries are particularly vulnerable to delays.

The country will also still be exporting avocados upu to October or November. The three industries concerned have not commented yet on the most recent problems.