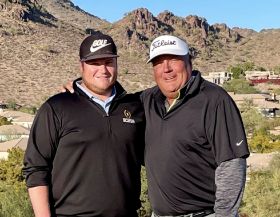 Starr Ranch Growers has announced the retirement of its director of marketing, Scott Marboe.

The leading US fruit grower-packer-marketer said Marboe had been a key member of its team for 35 years.

“His contributions within Starr Ranch and a variety of industry organisations like PMA and Pear Bureau Northwest will always be valued and remembered,” a release from Starr Ranch Growers said.

“His hard work, commitment and dedication are worthy of admiration.  From the early days of sales to his role as director of marketing Scott’s biggest trait was his larger than life personality, which lead to many long-lasting relationships throughout the produce industry.”

A number of Starr Ranch Grower’s long-standing customers paid tribute to Marboe’s career in the fresh produce industry. One of those was Bill Price, vice president of fresh sales and marketing at Associated Food Stores.

“Scott Marboe’s passion and commitment to all he served in the produce industry is immeasurable,” Price said. “He cares deeply for the success and personal wellbeing of every grower, packer, distributor and retailer he came to know.

“I consider it an honour and a privilege to have worked together with him for more than two and a half decades. I will miss his energy, creativity and love for the produce game.”

Jim Thomas, owner and president of Starr Ranch Growers, personally thanked Marboe for his service and wished him well.

“They say, retirement is the longest coffee break in your life, and we hope his cup is overflowing with health and happiness for years to come,” Thomas said.

The Marboe legacy will live on at Starr Ranch Growers with Scott’s son Mike currently an account manager at the company.

“It’s an honour to fill the large shoes he has left behind,” Mike Marboe said. “I have learned a lot from my dad on the business side of life, but nothing compares to the life lessons he has taught me throughout the years. If I could leave half the legacy he has when I am 30 years deep into Starr Ranch, I will have succeeded.”