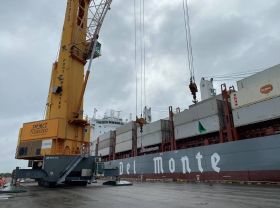 Del Monte and Florida-based Port Manatee have reached agreement to keep the fresh produce company’s fruit imports coming into the seaport until at least 2026, with options through 2036.

“Continuing our decades-long partnership with Del Monte is good for Del Monte, good for Port Manatee and good for consumers throughout the US Southeast who rely upon the efficient flow of bananas, pineapples, avocados and other much-in-demand fruits through the company’s regional distribution hub at our dynamic seaport,” said Reggie Bellamy, chairman of the Manatee County Port Authority.

Under the agreement, the Florida-based Del Monte unit, which has been importing fresh fruit into Port Manatee since 1989, will continue to lease Port Manatee warehouse facilities through at least August 2026, with two extension options of five years each running through August 2036.

The agreement is valued at more than US$1m per year, the port confirmed.

“Del Monte has enjoyed a strong, mutually beneficial working relationship with Port Manatee for more than 32 years, and we are delighted to sustain this partnership well into the future,” said Denise Tuck, Del Monte’s Port Manatee-based port manager.

“Expansion of the seaport’s dockside container yard facilitates our ability to maintain fluid operations bringing in produce from Central America on our fleet of energy-efficient containerships for many years to come.”

Del Monte imports represent a significant contributor to the record flow of containerised cargo through Port Manatee, which just reported a 53.3 per cent year-over-year increase in the number of 20-foot-equivalent container units crossing its docks, reaching 135,660 TEUs in the fiscal year ended 30 September.