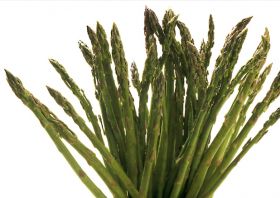 The California Asparagus Commission has reported that a series of cool-weather fronts coming off of the Pacific Ocean has delayed the traditional California asparagus harvest peak this season.

"Because of the unseasonably cool and damp weather in all growing areas, the harvest is running about two weeks later than normal," said Marc Marchini, chairman of AM Farms in Stockton. "The asparagus being shipped has greatly benefited from the slower maturation because is it high in sugars, and a larger percentage than normal is being shipped in the increasingly popular jumbo size."

According to the Commission, retailers have reported "substantial and incremental" profits from their asparagus section by stocking the standard size for salad and ethnic dish applications, larger varieties for side-dish recipes, and jumbos for grilling and stir-fry dishes.