Can Africa live up to its potential and emerge as an abundant source of produce in the 21st century? 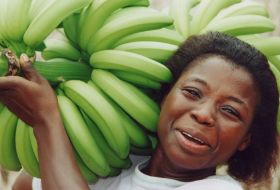 A ‘green revolution’ in Africa is being touted as one of the long-term solutions to the looming global food crisis, which assumes that agriculture as it is currently organised will not be able to produce enough food to feed the huge increase in world population expected by 2050.

It is a compelling argument. Given its huge size and abundant natural resources, Africa may well be a continent of massive opportunity. But it has also consistently failed to reach its full potential. Indeed, Africa used to be a net exporter of food in the 1960s; today its reliance on imports and handouts means it is vulnerable to the price hikes we have seen in recent months.

New solutions are in hand. Former United Nations secretary-general Kofi Annan is chairing a new organisation called Agra – the Alliance for a Green Revolution in Africa – which last month announced it had partnered with the US Millennium Challenge Corporation (MCC) set up by US President George W Bush to channel billions of dollars of practical assistance into helping develop agriculture in Africa.

“If we take the food crisis seriously, we can turn many of the African countries into breadbaskets,” Mr Annan said in Washington DC last month, welcoming Agra’s link-up with MCC. Agra plans to focus its first investments in Ghana, Madagascar and Mali.

So far, so good. It’s important that the international community recognises the role that Africa can play both to help feed the world and try to feed itself. Practical steps can be taken; Mr Annan noted that 40 per cent of Africa’s crops are lost after harvest, suggesting that investments are needed in the supply chain as well as in production.

The next step is to believe that African agriculture can achieve the kind of transformation that is needed. It has to become an exporter and it also has to end the scourge chronic hunger that now affects some 200m people across the continent.

Cameroon trade minister Luc Mbarga reminded some 200 guests invited to Antwerp to witness the discharge of a shipload of west African bananas and pineapples that trade plays a crucial role in development for his country.

Compagnie Fruitière president Robert Fabre spoke of his long engagement in West Africa, where development through trade has been his own corporate social responsibility for years.

Ten years ago, Zimbabwe was a demonstration of what Africa can do when things are in its favour: huge natural resources allied to talented management and a skilled labour force made the country a real force in African horticulture. But it’s gone from being a breadbasket to a basketcase. Now, to the north, the south, the east and to the west, Africans are showing what they can do. Long live the African revolution.