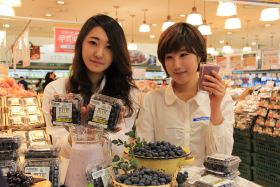 With the 2014/15 blueberry crop weighing in at more than 100,000 tonnes, the Chilean Blueberry Committee has announced plans for an extensive marketing campaign for the forthcoming season, which includes the use of apps for the first time.

The campaign – organised in conjunction with Asoex and ProChile –will run in Russia, China, South Korean, Sweden, Norway, the UK, Germany and Turkey and aims to penetrate deeper into these markets and further strengthen consumer demand.

“Our goal is to build on the programmes put in place last year in countries like Sweden and Norway, while finding new, high impact ways of reaching consumers such as apps in markets like Germany,” said Asoex’s Christian Carvajal. “We’ll also be extending the reach of some of the pilot promotional programmes launched last season which proved very successful in markets such as Turkey.”

Andrés Armstrong, CBC’s executive director, said the Committee will “strengthen promotional activities in Europe and Asia with the aim of “diversifying our export markets and identifying new opportunities with new importers, distributors and retailers”.

In Russia, the main focus will be on point-of-sale promotions in premium supermarket chains, while in Scandinavia, existing retail programmes will be rolled out to a greater number of stores.

In the UK meanwhile, CKC will support the programme developed by the Seasonal Berry Committee, made up of the main UK berry importers, the key component of which is consumer-focused supermarket competitions.

The German campaign seeks to exploit the widespread use of apps among consumers, the idea being to “increase the visibility of blueberries, promoting their convenience and wide range of uses as a breakfast, dessert or main course ingredient”, said Carvajal. He said the app will allow supermarket customers to download details of in-store promotions, advice on how to prepare and consume the product, as well as recipe ideas while shopping.

“In Turkey we want to expand the pilot programme introduced last season, which proved highly successful in reaching consumers and retailers, and incorporate foodservice and horeca customers,” Carvajal added.

Finally, promotions in China and South Korea will principally target young adult consumers with point-of-sale activities and through the use of social media networks, the aim being to educate consumers on the availability, quality and diversity of Chilean blueberries. In China Home Shopping TV programmes will provide an additional medium through which to reach consumers, Asoex said.