Ten years since its launch, the branded apple is available year-round and starting to make a splash in new, emerging markets.

Apple brand Kanzi is carving a solid reputation in the market as a high-quality apple with a strong marketing programme to support sales growth.

Now in its tenth season, production of the apple has apparently reached the critical mass necessary to begin expanding into new markets.

Here, we speak to Urs Luder (pictured below), chief executive of brand and cultivar licence owner GKE, about the apple’s recent impressive expansion.

How far would you say Kanzi has come over the past decade?

Urs Luder: It’s clear that Kanzi is now a global product. The biggest volume remains in Europe, but other regions of the world are coming up fast – especially North America, where there have been heavy plantings and there is still some volume to come.

We expect this area to grow rapidly because there is clear demand there. Southern Hemisphere volumes are also growing fast, with plantings in South Africa, New Zealand, Chile and Australia.

In Europe, production is now around 60,000 tonnes and all of the major growing areas have substantial volume. The apple is now produced in Benelux, northern Germany, eastern Germany, southern Germany, northern Italy, Switzerland and the UK.

This makes it a very attractive product, especially from the point of view of spreading the risk. It allows us to supply the market better.

We can now satisfy much of the demand that exists and that’s exciting. We can also supply for 12 months of the year, which is exactly what consumers and customers want.

Going forward, growth will be more regulated but we’ve taken some huge steps compared with a few years ago. In the next couple of years, we will continue to grow, but in a less spectacular manner. Basically, we will follow the demand. 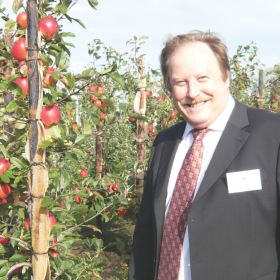 Is that extra volume allowing you to expand?

UL: Yes, we’re also expanding into new markets. Previously, we could only supply the production markets but now we’re able to supply new ones in Scandinavia, the Middle East and Asia, which are already quite important markets and will become increasingly so in future.

But we’re still not where we want to be even in those production markets – Germany, for example. Until now the problem was supply, but our volume in Germany continues to grow nicely. We have production in Lake Constance, Dresden and the Altes Land.

Kanzi’s taste profile is said to be very well suited to the European market, plus it stores well. How are you communicating this to consumers?

UL: We are doing a lot of marketing, for example we do experiential marketing, with lots of social media, tastings, point-of-sale promotions and so on, but it’s important we make sure the apples are available. Supply remains below demand, but that is good.

Overall, we do have a unified approach to communications and our partners adopt a single brand identity, but this is then tailored to the local market. We also have to look for the best value for money.

For example, in the Netherlands, Belgium and Germany we use radio and television, whereas in the UK television is too expensive.

So do you have any specific plans for this year’s campaign?

UL: Our intention this year is to convey a consistent message about the sweet, seductive nature of Kanzi apples.

This is a special campaign for us because it’s our tenth sales season. We want to use that as a hook to remind people that it’s a successful brand and a product that has enjoyed the fastest growth of any apple.