Getting the blues at GBC2015 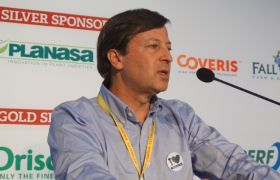 Quality remains key to maintaining an upwards trend in blueberry sales, although other factors must be considered when marketing to the next generation of consumers.

That was the verdict of expert speakers in a session focusing on blueberry suppliers at today's Global Berry Conference in Rotterdam.

Andres Armstrong of the Chilean Blueberry Committee (CBC) told a packed conference room that without a quality product, there simply would not be the demand for the fruit.

"If we don't concentrate on producing a quality product every single year, it makes it very difficult to market the fruit," he explained.

The CBC's focus is to drive demand in overseas markets, he continued, with a particular emphasis on prioritising those markets where Chile's fruit can plug a winter gap.

"Step by step we are making people aware of the availability of blueberries in their winter months, which is really helping to drive an increase in counter-seasonal consumption," he noted. "We particularly targett hose markets where there is some sort of established blueberry industry and we then look to demonstrate that they can get the same high-quality fruit in the winter."

Some of the new markets being targeted for promotions include Turkey and Brazil, with the latter described by Armstrong as an "interesting market".

Carlos Stabile of the Argentinean Blueberry Commission also placed an emphasis on the search for ever-improving quality, one of the key challenges his industry faces.

"Argentina has invested in new varieties, improved technology and has also gained food quality and safety certification in a bid to improve the quality of our blueberries," he explained.

Stabile pointed out that challenges such as fruit consistency had also been met, through more organised information, greater experience and the introduction of new and early producing varieties to use as a buffer for cold winters.

In addition, the industry had met logistical barriers by, for example, diversifying away from Buenos Aires and utilising Tucuman airport, which boasts more than 65 direct flights from Argentina's early production area.

He also noted that it was important for Argentina to add value to its berry offer by investing in organics and new product development.

Michael Roos, founder of industry service provider Roos, meanwhile noted that the marketing-savvy Generation Y – consisting of 13 to 29 year-olds – have other factors to consider when purchasing, aside from quality, thanks to the influence of technology.

Using an example tested on the German market through the Kochmamsell application, Roos explained that this group of consumers also demanded health, convenience and sustainability when it came to their purchases, and that future marketing campaigns for blueberries should look to work with technology to push the fruit and its qualities.

"This Generation Y and its use of modern technology, such as apps, means changes must be made in how produce is marketed," he outlined. "They use technology to talk, gather product info and make purchases at any time, and this must be embraced."

The Global Berry Congress is running from 23-25 March in Rotterdam, attracting over 350 delegates from the international soft fruit industry.