Joint promotional campaign led by France and Italy will run for three more years, supported by a budget of €5.6m 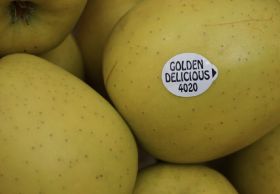 Can Italy and France find new markets for Golden Delicious?

Italian apple association Assomela and the French interprofessional organisation Interfel have been awarded more than €2.8m in funding by the European Commission to support a three-year campaign aimed at boosting consumption of apples in non-EU markets.

The campaign, which has a combined budget of €5.6m including funds provided by Assomela, Interfel and their own governments, will continue the work carried out by the two organisations as part of a three-year project called European Fresh Attitude, which focused on apples and kiwifruit in so-called third countries.

The results of that project have been described as “extremely positive” by representatives of Assomela, which counts major apple suppliers Vog, VI.P, Melinda and La Trentina among its members.

The aim of the new project is to raise awareness and encourage exports of Italian and French apples to markets in Africa, China, the Middle East, Norway, Russia, South-East Asia and South Korea.

As well as enabling the groups to promote the campaign at key trade events likes World Food Moscow and Asia Fruit Logistica in Hong Kong, the funds will also be used to pay for PR activities at point of sale and at major sporting events in Morocco, Israel and Norway.

Giulia Montanaro, head of international relations at Assomela, welcomed the EC’s decision to renew its financial support for the campaign.

“Consolidating and increasing exports of Italian apples outside the EU is fundamental at a time like this and the project that’s been approved can be a useful tool for our member producer organisations in reaching that objective,” she said.

Montanaro added that the project’s approval had been made more likely thanks to the good collaboration between Italian and French counterparts over the past few years, a kind of cross-border teamwork that could make it easier to enter new markets in future.