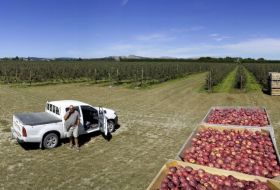 The deal – announced to the New Zealand Stock Exchange on 15 March – sees the Chinese state-owned enterprise buy 21.5m shares at NZ$2.60 each from private equity company Direct Capital Investments, which is selling down its stake in Scales Corporation to 2.6 per cent.

Scales Corporation's chief executive Andy Borland said China Resources was “a good partner, from a strategic point of view”. He told New Zealand’s National Business Review he was hopeful China Resources’ strength in consumer goods and its interests in supermarket retailing would help support Scales’ sales of its Mr Apple brand in the China market.

Led by Mr Apple’s sales of higher value apples to Asia and the Middle East, the horticulture unit has been the standout performer for Scales, which doubled its annual net profit to NZ$38.9m in the year ending December 2015.

“Our Asian sales are good – it’s a diverse market and we supply into many countries throughout Asia – the apple season has just started two or three weeks ago, but the market is sold,” Borland told National Business Review.