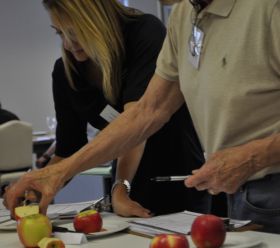 A number of international and South African growers and marketers have tasted the new apple and pear varieties that are emerging from Re:inc Innovation's breeding programmes.

The group included one leading supermarket and the tasting took place during a mini conference aimed at reviewing the progress of re:inc innovations’ new cultivar programme.

The visitors tasted 16 pear and 18 apple selections from the breeding programme and the response was very positive according to Riaan van Wyk, chief executive of Re:inc.

“Every visitor was requested to complete evaluation sheets and the results show that many of the selections have clear commercial potential,” he said.

Re:inc director Liezel Kriegler noted that six licensees have already signed up for the breeding programmes and The company was in negotiations with 14 further groups to take up licenses.

“There are a few more licenses open for discussion and re:inc hopes to finalise them all during 2016," she explained,

The Licensees will have the exclusive or semi- exclusive rights to all the seedlings or selections in the breeding programme for their country. This will give the licensees a major advantage both now and in the long-term, according to Van Wyk.

In October 2015, Re:inc and East Malling Service launched a range of red and pink flesh apples in Edingen-Neckarhausen in Germany, where re:inc also breeds apples and pears on an annual basis.

According to Kriegler, five of these selections scored high points and they are now in a process of multiplying the planting material for licensees to plant these selections on a commercial scale.

“Re:inc Innovation focuses on bi-colour and bright red pears that are crispy, juicy and full of aroma and flavour. We believe that the pears of the future will be eaten like an apple, from the tree or refrigerator,” he continued.

The apple sector is becoming more competitive with a number of bi–coloured apples entering the market over the last few years.

“Re:inc Innovation is focused on brighter red and pink apples with a lot more flavour, snappiness and high juice contents," Kriegler continued, outlining that there are still many gaps in the market and predicting that pink-, red-, yellow- and orange-fleshed apples would make a difference to the global industry.