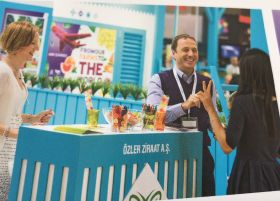 Eurofruit spoke to Ayşe Özler, marketing manager at Turkish exporter Özler Ziraat ahead of the Turkish lemon season. According to Özler, the company is gearing up for a highly competitive campaign on the Asian market due to large volumes from both South Africa and Egypt.

What are Southern Hemisphere volumes like? Do you expect a good window for the Interdonato?

Ayşe Özler: I do not know about Argentina, but from what I have heard from friends in South Africa, the lemon crop is big, with large volumes expected especially in August. If that proves to be true, and the weather conditions do not change, that means they will be able to supply global markets well until mid-November. In addition, for the last two seasons, we have seen Egyptian lemons arriving on the market in December. Their volumes are getting more and more significant each season. So it seems that the window for Interdonato will be very narrow.

What markets will you be targeting this season? Which look the most promising?

AÖ: Turkey's geographical position allows us to reach many different markets, and in the past ten years we have already expanded our exports to many new countries in Asia and the Middle East. In order for us to further expand to more markets, our government needs to take faster action on signing necessary trade agreements and protocols because we are blocked by these official barriers, even if there may be demand for our products in those markets.

Which markets we target for lemons, or which appear the most promising, will depend on the dynamics of each market and the availability and remaining stocks of Southern Hemisphere lemons. As the window will be very narrow, we must remain observant and not rely on the dynamics of just one single market. I guess we will have to be ready for fierce competition!

In particular, how is the Asian market developing for your lemons?

AÖ: Asia has been developing and performing very well, both volume- and price-wise, over the past decade. But the main reason for this was the window we enjoyed, during which our lemons benefited from being cheaper than US lemons. Our interdonato variety benefited from the end of October until mid-December, while our Lamas variety played that role from mid-December till March. Now, if that window is filled by South African lemons until mid-November and then by Egypt from December to March, things will change drastically for us. We have to understand that and adapt our position accordingly.

What are the main challenges that you are facing?

AÖ: I think the above points are enough of a challenge for us! But as a farmer, I have got to add that climate change is already a challenge for farmers across the world and will become an even bigger challenge in the future.