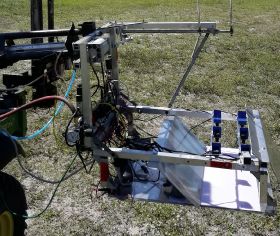 The day is coming when citrus farmers use artificial intelligence to detect the pin-sized insects that can infect the fruit’s trees with the deadly greening disease.

According to precision agriculture engineer Yiannis Ampatzidis, we are not too far away from this reality, with his research team starting to perfect a system to detect the Asian citrus psyllid.

Citrus growers are looking for any advantage to control psyllids, which, if infected with greening, can transmit the deadly disease to citrus trees - indeed, cItrus greening (or Huanglongbing) has spread to 40 countries around the world.

In Florida, citrus production volume declined by 71 per cent from 2000 to 2017, primarily due to losses from greening, according to UF/IFAS economists. The disease entered Florida in 2005.

“Monitoring the psyllid population is an essential component of citrus greening management,” said Ampatzidis, an assistant professor of agricultural and biological engineering at the University of Florida Institute of Food and Agricultural Sciences

Until now, growers have used the so-called 'tap sample method' to find and detect psyllids in their citrus trees, Ampatzidis said. Using that method, farmers strike randomly selected branches and count psyllids that fall onto a sheet of paper. That system is reliable and efficient, but labour-intensive and time-consuming.

Through their research, Ampatzidis and his team of scientists have found a new system that works accurately and saves time and money.

“We automated the tap sample method, utilising machine vision and artificial intelligence (AI),” he said. “The system could be a great way to automate scouting procedures in citrus and to be extended to other crop insects.”

Ampatzidis led scientists who used equipment to take images of trees, fruit and the insects in groves. The machinery distinguishes between psyllids and other pests.

Specifically, researchers took their data-gathering gear into a citrus grove at the UF/IFAS Southwest Florida Research and Education Center in Immokalee, Florida.

This novel technology consists of a tapping mechanism to strike selected branches and a board with a grid of cameras that take pictures. Then, an AI-based algorithm analyses the images, detects, counts and finds the falling adult psyllids. Those photos show scientists, and will eventually reveal to growers, if the tree has psyllids.

“The AI-based software can detect and distinguish Asian citrus psyllids from other insects and debris,” said Ampatzidis.

The system includes a GPS device to record the location of each tree and whether the tree has psyllids, he said. The software develops a map with psyllid detections for each scouted tree so scientists can better see the psyllid data.

From experiments in a grove,  psyllids were reportedly detected with 90 per cent accuracy.

“The data from each tree can be used to generate maps compatible with precision equipment for variable rate application in order to apply the right amount of pesticides only where needed, and hence, decrease agro-chemical use and expenses, and reduce environmental impact,” he added.

The new study is published in the journal Computers and Electronics in Agriculture.