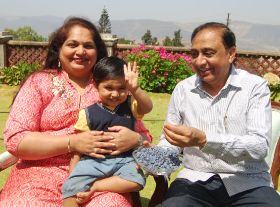 Yupaa, a leading importer, grower and distributor of fresh fruit in India, this year celebrates 30 years of pioneering trade in the Indian fresh produce sector.

Inspired by a love of fresh strawberries, Yupaa co-founder Ambrish Karvat left his life as a flower exporter and embarked on India’s first modern strawberry-growing venture in Panchgani, Maharashtra, with his wife, Yujita, in 1989 when their son Parth was one-year-old.

And, just like that, Yupaa was born; first selling its home-grown, large-sized, US varieties of strawberries on the Indian market, the likes of which had never been seen in India before, according to Ambrish Karvat.

“The project was an instant and huge success,” said Karvat, speaking to Asiafruit Magazine in an exclusive interview. “The farm and our fruit became extremely popular in the region, and other farmers wanted to follow suit. We are extremely proud that more than 3,000 acres of strawberries are being cultivated [in India] today based on our model.”

Not content to sit on their laurels, within a decade the Karvats diversified, helping to pioneer New Zealand Zespri kiwifruit imports into India – and marking the start of Yupaa’s trail-blazing import career.

Yupaa’s introduction of New Zealand Enza apple imports into India in 1999 was swiftly followed by the inaugural US, South African and Chilean apple arrivals, according to the company, and by what it described as India’s first-ever Italian kiwifruit and South African orange and pear imports.

As Yupaa’s import portfolio grew, so too did its team, facilities and structure. By 2016, the firm was sourcing a wide range of fruit from China, Argentina, Iran, Belgium, Poland and Spain, and had built new packhouse and cold-storage facilities.

“Capespan’s investment in Yupaa and willingness to partner with us shows its confidence in what we do, and can do,” said Ambrish.

Since then, Yupaa has started exporting Indian grapes to Europe in partnership with Capespan, and also harvested its first blueberry crop at its Maharashtra farm.

“The farming division and import growth is something that we are bullish about, and we are working towards expanding both as the local markets have matured for a lot of product,” the Karvats said.

Today, Yupaa’s operations are managed by the Karvats’ son, Parth, allowing Yujita to take on more of a mentoring role, and Ambrish to focus on new developments and expansion planning.

“Our son Parth, who has witnessed Yupaa’s journey from the start, shows all the right attributes to take the company and business to the next level,” Ambrish and Yujita said.

Commenting on the secret to the company’s remarkable success over the last three decades, Yujita said: “Passion, good intentions and ethics. This enables the next crucial key, which is a dedicated and loyal team of staff for all operations, departments and divisions.

“The strong and long-term relationship that we have forged over the years with suppliers, customers and all other service providers has also been key to our success,” she added.

“Ultimately, it is the people you work with and your relationship with them that acts as the roots for any company.”

This article is based on an interview with Ambrish and Yujita, which appeared in the April 2019 edition of Asiafruit Magazine. To order your copy, email to subscriptions@fruitnet.com