Employee protests and aging infrastructure having serious effects on South Africa’s imports and exports, with the citrus industry likely to be hardest hit 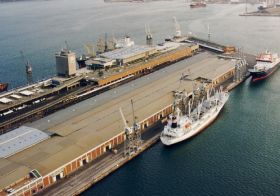 Leading citrus producers in South Africa’s Eastern Cape region say they are facing major losses due to the disruption caused by a ‘go-slow’ labour protest movement and a failure to fix collapsing infrastructure in key South African ports.

The ‘go-slow’ action is being staged predominantly by Transnet Port Terminals (TPT) employees in response to their dissatisfaction about a recently introduced bonus scheme. Workers are intentionally taking longer to process goods that are being imported and exported, leading to productivity rates plummeting and longer wait times at ports across South Africa.

Latest reports indicate that the go-slow has now spread to Cape Town where it will affect not only citrus exporters, but those of apples and pears as well. It is understood that it is also affecting the imports into South Africa of meat, as well as exports of motor vehicles produced in the Eastern Cape.

Meanwhile in Port of Elizabeth the failure to repair two damaged container cranes, coupled with new but yet to be operational machinery from Durban, is slowing progress.

Citrus Growers Association’s (CGA) Justin Chadwick said last week that there has been little investment in the port precinct to handle the additional needs of increased export volumes, while the growth in markets requiring cold shipment has also impacted on cold stores.

“The present labour led disruptions at the port shows the vulnerability of importers and exporters to a monopoly port operator. Delays in Port Elizabeth have shifted to Durban and Cape Town with devastating impact on the citrus industry."

Hannes de Waal, CEO of Sundays River Citrus Company (SRCC), and Mark Jensen of well-known exporter Safpro, confirmed the port disruption is extremely serious for the citrus producers of the region. “The handling tempo of containers has dropped to less than half of what the norm is,” said Jensen.

De Waal said the result is an oversupply of fruit in cold stores which could not be shipped. “This affects our ability to meet programmes and is likely to cost growers a great deal this season.”

Meanwhile Transnet has confirmed that activities at the container terminals in Durban and at Ngqura near Port Elizabeth are affected by industrial action. The transport and port company are yet to respond regarding the latest development in the port of Cape Town.

Sources in the citrus industry say various meetings have been held since last week but the issue is one that needs to be addressed by Transnet and its employees.

“These issues should have been addressed months ago and they should not have allowed the problem to escalate to this point. Sales we lose now because of our inability to meet programmes will never been recovered,” said Jensen.

Efficiencies in the South African ports have now been a recurring problem for some time with little hope of progress being made. “We are between a rock and the hard place,” said de Waal. “The cost to find alternative ports will be prohibitive, whether it’s Cape Town, Durban or Maputo. We know that Durban has its own problem and it is not feasible to consider Maputo.”

De Waal said another container terminal should have been built on the South African coast more than 20 years ago. Logistics operators have pointed the finger at Transnet for failing to provide an efficient port service and in the process endangering the major investments made in the citrus industry over the past decade.

The crisis is likely to affect export volumes and that there could be undersupply in some markets, depending on how long the disruption continues. “Our region packs a lot of organic fruit, as well as fruit produced as ‘chemical free’. These products are particularly sensitive and cannot be subjected to these delays” said de Waal.