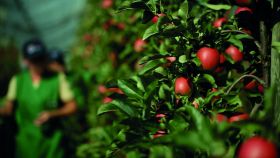 Not only did BayWa increase its sales of heating oil thanks to lower prices, but it also traded strongly in photovoltaic (PV) components and constructed numerous wind and solar power plants.