GIVE, a new venture involving Mastronardi Produce is set to develop an innovative indoor farming project in the Middle East 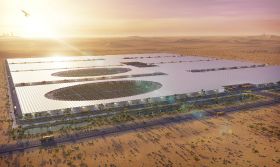 One of North America’s leading greenhouse grower-distributors, Mastronardi Produce, has partnered with entrepreneur John Paul DeJoria in a new venture, which aims to deliver innovate indoor farming projects around the world.

The goal of the new company, Green International Ventures (GIVE), is to make locally grown fresh produce more widely available around the globe via its proprietary advanced high-density farming system.

The company has selected the Middle East as the first market to develop what it claims will be one of the world's largest and most technologically-advanced indoor farming projects.

The targets of the project include reducing the Middle East’s dependence on imported food, creating a sustainable source of local employment and increasing the region's non-petroleum-based exports.

Paul Mastronardi, president and chief executive of Mastronardi Produce, said his company’s passion for increasing access to local, sustainably grown fresh produce was one of the driving forces behind the venture.

"Our first location in the Middle East will allow us to reach over half the world's population in less than eight hours, and this is just the start,” said Mastronardi.

“Look for more global locations as we continue to scale to meet the growing need for food security, safety, and sustainability."

GIVE will also support the integration of modern AgTech initiatives into the local farming community and expand knowledge of sustainable agricultural techniques by establishing a permanent research and development facility in the region.

Produce grown in these systems will be marketed under Mastronardi Produce’s Sunset brand and Sunset of Holland will be the first distributor for the GIVE partnership.