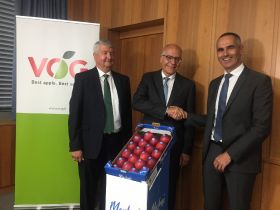 Pardatscher, whose appointment was first announced back in November 2018, was introduced as the group's new chief executive during a special meeting at its headquarters the House of Apples in Terlano on 28 August, formally bringing to a close Dichgans' almost three decades in charge.

Dichgans will continue to oversee several projects for the Alto Adige Variety Innovation Consortium on behalf of Vog and another major player in the Italian apple trade, VI.P Val Venosta.

Described by his peers as "a decisive, determined man with a deep knowledge of the sector and markets", Dichgans graduated in economics from the University of Fribourg and in 1985 joined Vog as export manager, going on to become head of sales before his appointment as CEO in 1990.

During his tenure, he led major changes in terms of the consortium's organisation, product range, turnover growth and new market development.

According to the consortium's members, his success was based in no small part on his ability to work as a team player and to keep management focused on strategic objectives.

He was also responsible for introducing the Marlene brand, whose distinctive blue sticker marked out the quality of South Tyrol's apples for consumers.

"Clearly, I am proud of the goals achieved over the years,” commented Dichgans, “and I am especially pleased to pass on to my successor – to whom I naturally extend my best wishes – a company that is healthy and forward-looking, both in terms of turnover and of ongoing variety innovation projects.

"There are many new challenges and there is certainly all to play for with regard to international competitiveness. I arrived at VOG when the world was still divided by the Cold War, while today we talk about the global market.

"For many years, quality and service have been the right answers to market demands. They were the features that enabled us to stand out from our competitors. Today they have become an implicit prerequisite."

He added: "The next decade will witness saturated markets, resulting in fierce competition between the standard apple varieties. There is consequently a need for new differentiation strategies.

Opportunities certainly, if not exclusively, lie in brave variety innovation in order to occupy premium segments and market niches. And the keywords, besides 'quality' and 'service', will be 'innovation' and 'flavour'.”

A new road ahead

Pardatscher previously ran Autostrada del Brennero, the company that operates Italy's A22 motorway – in which the region of Trentino-South Tyrol has a 32 per cent share.

Between 1999 and 2005, he was chairman of the South Tyrolean Young Farmers Union, and since 1996 he has been a member of the board of directors of the Kurmark-Unifrut fruit cooperative, serving as chairman in the last three years and eventually joining the Vog board of directors.

“The steps taken in recent years by Gerhard Dichgans for the development of Vog show us the direction for the coming years,” he said. “We will have to steer towards the future with renewed energy, unity and determination.

"We will continue to develop new varieties and to search for new markets and we expect to achieve major milestones in this direction within the next two years. It will be important for us to maintain this approach, while simultaneously looking to the many long-term challenges that lie ahead.

"There will inevitably be difficulties, but I am convinced that, partly thanks to the collaboration of all my staff, the Vog consortium will continue to grow as a leading player in the apple sector.”

Vog chairman Georg Kössler said the consortium was sure of a bright future despite Dichgans' departure.

“When new top management is appointed to a company, it always marks the start of a new era,” he reflected. “We are confident, knowing that the new CEO Walter Pardatscher will, on the one hand, strive to maintain necessary continuity with the past and, on the other, offer essential stimuli for future development. Both his experience in the sector and his managerial qualities will prove useful.

He added: "Finally, I would like to thank the outgoing CEO Gerhard Dichgans, on behalf of myself and the entire board, for his valuable work, his untiring commitment and the objectives achieved, his exemplary dedication to identifying the best and most promising solutions, his loyalty, his managerial qualities and the spirit of collaboration that he has upheld over the years.”

Arnold Schuler, Agriculture Councillor for the Province of Bolzano, said in conclusion" "Gerhard Dichgans has shaped apple marketing and commercialisation in South Tyrol over the last decades. Now the appointment of Walter Pardatscher marks the start of a new age. The new CEO inherits a company that has been successfully structured and launched, but he will have to face a number of challenges.”