Vegetable seed company hits new milestone of €440m for 2018/19, with growth across "all crops and regions" 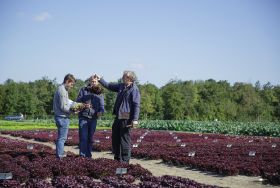 According to the group, its revenue grew across "almost all its crops and regions", while its market share of around 9 per cent makes it one of the world’s top five vegetable seed companies.

"The company has invested in scaling up its production capacity in Tanzania, Mexico and Chile, and in improving its research facilities in China, Spain, the USA and Australia," the group outlined. "Investment projects in the Netherlands included land purchases in De Lier for the development of a new breeding facility for tomatoes, peppers and aubergines."

“Developing and launching a new variety on the market takes between six and sixteen years," said Ben Tax, one of the directors at Rijk Zwaan. "Modern technologies such as digital phenotyping, machine learning and artificial intelligence are helping us to speed up that process and understand even more about plant traits. We’re continuously innovating in order to meet the ever-changing needs of customers and consumers."