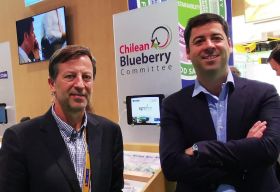 Felipe Silva, CEO of Zur Group, has been elected as the new president of the Chilean Blueberry Committee, replacing Felipe Juillerat of Hortifrut.

On assuming his new position, Silva noted that: “this is a very special moment for the blueberry industry. In Chile, and elsewhere, changes in international supply are generating different challenges worldwide”.

In the case of the Chilean sector, Silva pointed out that growers faced numerous challenges.

“In today’s increasingly competitive market, it is crucial that we go on achieving greater consistency in the condition of our fruit,” he said. “Otherwise this will affect our role as a leading fresh blueberry supplier, which we have built up over so many years.”

At the same time Silva pointed out that “Chile has a proven food safety record, and we have a product with a spectacular and sweet taste, so there is without doubt potential for us to continue being a preferred supplier.

“But we must reach new and existing markets with greater product consistency. We must also continue making progress in developing blueberry consumption in different parts of the world.”

Silva also highlighted the work that the industry has done regarding varietal renewal, which has allowed Chile to arrive on the market with better quality fruit, noting that improvements along the supply chain, such as shorter transit times to markets like Europe, have been a major step forward.

The new president explained the important role played by the committee in advancing the interests of the sector, promoting Chilean blueberries and creating new commercial opportunities for the industry.

Silva said he would assume his new role with “responsibility and enthusiasm”, and hoped the years of experience he had accumulated in the industry would be put to good use.

Felipe Silva will be in office until May 2020, when the board meets again and elects his new president for a period of two years, where he could eventually be re-elected.