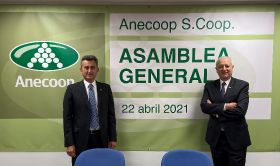 Announcing the results on Thursday, president Alejandro Monzón said 2020 had been a historic year, in which the role of agriculture had gained a new respect.

“The unity and efficiency with which we were able to face the first weeks of the pandemic put agriculture highlighted the essential role that agriculture – and Anecoop – played during this crisis,” he said.

Anecoop is Spain’s biggest fruit and vegetable cooperative grouping, the incorporation of Costa de Almería in November bringing the total number of cooperatives and partner companies under the Anecoop umbrella to 72.

The group said it had made significant progress in its strategy towards greater integration of member companies last year, with two cooperatives, Sant Bernat de Carlet and Guadacoop joining forces to create second-degree cooperative Ribercamp.

Monzón encouraged member cooperatives to continue taking steps towards integration, noting that: “the size of an organisation has proven to be a fundamental factor in allowing it to successfully tackle the new challenges facing the agri-food sector and become more competitive”.

Managing director Joan Mir emphasised that the pandemic had shown the need for a “powerful, diversified and independent primary sector” in Spain.

Other initiatives announced by the group during the past year include the creation of a Innovation Board and Sustainability Committee to drive future strategy, as well as the implementation of a group-wide Equality Plan.

A breakdown of the results showed that higher citrus prices due to strong Covid demand were a bit contributor to the group’s improved overall results. Citrus turnover grew 11.3 per cent in 2019/20, in spite of sales volume falling by 13 per cent.

Anecoop said two of its other flagship products, Bouquet seedless watermelons and Kaki Persimon, experienced a difficult season but continued to be important crops with a bright future.

In vegetables, turnover increased by 1.7 per cent on the back of a 2.6 per cent fall in sales volume, again due to higher prices across most products.

Anecoop noted that its fresh and prepared food segment had been hit by the closure of the foodservice channel during lockdown periods.

The company’s Bio organic fruit and vegetable line, which has been growing rapidly in recent years, also reported a slowdown in sales growth due to the pandemic.