Covid: a catalyst for change in fresh produce

Freshfel event hears about need to build a food system based on health, social inclusion and a resilient ecosystem 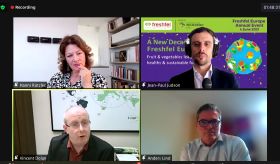 Europe’s fruit and vegetable sector should seize on Covid as an opportunity to accelerate efforts to carve out a greener future, with a renewed focus on the importance of a plant-based diet and environmentally sustainable production model.

This was the take-home message from Friday’s Freshfel Annual Event, which brought together key players from Europe’s fresh produce industry to reflect on an extraordinary year for the business and celebrate the association’s 20th anniversary.

Freshfel’s general delegate Philippe Binard kicked off proceedings by looking back on the challenges faced by the sector in 2020, which besides Covid included Brexit, moves towards lowering MRLs and the ongoing Russian embargo.

Binard also highlighted the many successes achieved over the past 12 months, such as bringing more transparency and traceability to the market, and ensuring the sector is well prepared for the Farm to Fork strategy.

The first ever president of Freshfel, Kai Krasemann and current president Stephan Weist, reflected on Freshfel’s success over the past 20 years in uniting a fragmented industry under a single organisation representing the entire supply chain.

Following this, Claire Bury, the European Commission DG SANTE’s deputy director general, gave a keynote presentation outlining the progress being made towards the European Green Deal, which sets out to make Europe the first climate neutral continent by 2050.

She said the pandemic had made people more acutely aware of the relationship between health, food systems and the environment and underscored the importance of the Farm to Fork strategy aiming to create a sustainable and resilient food system in which nobody loses out.

Bury highlighted the highlighted encouraging progress made by EU member states in reducing the use of pesticides. She also explained why the European Commission had decided to reopen the discussion on new genomic techniques such as gene editing, which could play an important role in making agriculture more sustainable.

During the conference, Eosta CEO Volkert Engelsman suggested that Covid had given Freshfel a unique opportunity to drive the agenda in building a food system based on health, social inclusion and a resilient ecosystem.

He said that organic farming provided a “fantastic toolkit” for sustainability and urged conventional farmers to embrace some of the strategies used in organic farming to improve biodiversity and soil heath.

In honour of the United Nations declaring 2021 the International Year of Fruit and Vegetables, Beth Bechdol, deputy director general of the Food And Agriculture Organisation (FAO), gave a keynote speech on the importance of the fruit industry to the global agri-food system.

Bechdol highlighted the essential role of fresh fruit in human health, income generation and as a contributor to the UN’s Sustainable Development Goals (SDGs).

In a session on the future of consumption, Hanni Rützler noted that big changes in consumption trends, such as the rise in online grocery sales, ghost kitchens and meal delivery kits, and the increased focus on local food production, offered new opportunities for suppliers.

Vincent Dolan of Total Produce agreed, but suggested that the sector needed to work more on its messaging to consumers, noting that “rather than telling people what they already know, namely that fruit and vegetables are healthy, maybe we should talk about the contribution they makes towards mental health, and also sustainability”.

Finally, looking to the future, Rabobank’s Cindy van Rijswick and Lorena Ruis Ponce of Santander Group pointed out that although producers face increasing risks due to climate change and growing political uncertainty, the industry is well positioned to take advantage of the growing focus on health and the environment.