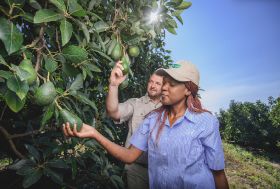 Halls is upping its investment in new technology as part of its ongoing commitment to sustainability and adding value to its global customer base.

Speaking at the recent Agrihub Conference held in Stellenbosch, the company’s chief information officer Richard Franklin explained that on-farm profitability is being improved through the development of solutions such as input marketplaces, precision agriculture, mechanisation and automation, and decision support software.

In order to implement precision agriculture solutions, also known as smart farming, relevant and accurate data must first be collected. Estimates indicate that nearly 20 per cent of the 1.5bn hectares used globally for food production has been digitised to date, although this is heavily skewed towards developed markets, row crops and large industrial farms.

However, 70 per cent of the world’s food (measured by calories) is supplied by small-scale farmers and to serve them will require simple, affordable, and scalable solutions.

Among the developments in data and modelling that Franklin highlighted were satellite image processing solutions and the development of AI models to predict climatic conditions.

The former enables individual fields and orchards to be automatically identified and analysed, and basic tools offered to users for free or at very low cost, providing useful platforms for further optimisation.

AI models, meanwhile, can predict microclimate conditions with more than 90 per cent accuracy when compared to actual connected sensors deployed around the world. They can scale initial solutions rapidly and serve as the basis for optimising the placement of specialised sensors, as well as form the basis of “data- or prediction-as-a- service” business models in the future.

Franklin argued that while the required technology is available today, the challenge is to apply it towards building actionable solutions for farmers that fit in with existing operational processes, rather than standalone solutions that increase complexity.

With 1.3bn tonnes of food produced for human consumption being lost or wasted while 800m people go hungry every year, Franklin pointed out that optimising the supply chain should be one of the highest priorities for fresh produce companies.

As part of its ongoing commitment to sustainability and get the best value out of every piece of fruit, Halls has initiated projects to digitise its processes, correlate and integrate data between systems, build optimisation models, and do scenario modelling. These are being done in collaboration with its grower partners, logistics partners and customers.

Alongside the investment in technology Halls is training staff to ensure they have the means and the ability to operate the new tools.

The company said it planned to roll out smart farming technology on its own farms and those of its grower partners, which span seven countries, as part of its ongoing commitment to adding value to its global customer base.