A diet rich in tomatoes could reduce the risk of having a stroke, Finnish research into the chemical lycopene has suggested 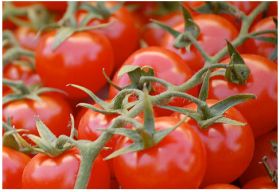 An investigation has suggested that a diet rich in lycopene, a chemical found in tomatoes, could help reduce the risk of a stroke.

According to the Finnish research group behind it, the study aimed to examine whether serum concentrations of major carotenoids are related to any stroke and ischemic stroke in men.

Over 1,000 Finnish men age 46-65 years old were tested for the project, with those boasting the most lycopene in their bloodstreams proving the least likely to have a stroke. Of the group of 258 men in the low lycopene group, 25 had a stroke, while the 259-strong high lycopene group saw only 11 strokes.

"This prospective study shows that high-serum concentrations of lycopene, as a market of intake of tomatoes and tomato-based products, decrease the risk of any stroke and ischemic stroke in men," the report concluded, suggesting that the risk of a stroke was cut by 55 per cent by having a diet rich in lycopene.

The red chemical is also found in peppers and watermelons.