Romania has been chosen as Country of the Year for the next organic event, due to the remarkable growth seen in its organic sector 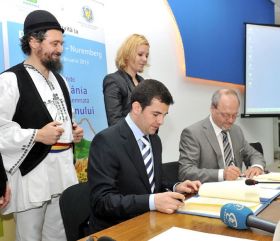 Romania has been named as Country of the Year for next year's BioFach organics exhibition, which takes place in Nuremberg, Germany, on 13-16 February.

The number of certified organic farms in the country trebled to 9,800 between 2010 and 2011, according to Bio Romania, while domestic sales of organics are rising by around 20 per cent annually.

The number of organic products has also increased, from 3,300 to 10,000 in the past two years, key among them berries, mushrooms and herbs.

Claus Rättich, member of the management board of NurnbergMesse, commented: "We look forward to welcoming Romania, which has already enhanced the event with locally grown organic products for many years, as Country of the Year at BioFach in 2013.”